Economies of Scale in Asset Management: Who Benefits?

The total assets managed by domestic equity funds rose from $26 billion in 1980 to $3.5 trillion in 2010. Would you expect the expenses charged by such funds to rise in proportion to the amount that they manage? Or by less?

Burton G. Malkiel argues in "Asset Management Fees and the Growth of Finance," in the Spring 2013 issue of my own Journal of Economic Perspectives,  that there should be considerable economies of scale in managing a stock portfolio. (Like all articles in JEP back to the first issue in 1987, it is freely available on-line compliments of the American Economic Association.) Malkiel writes:

"There should be substantial economies of scale in asset management. It is no more costly to place an order for 20,000 shares of a particular stock than it is to order 10,000 shares. Brokerage commissions (which are usually set in a flat dollar amount per transaction, at least within broad ranges of transaction size) are likely to be similar for each purchase ticket, as are the “custodial fees” paid to the bank that holds the securities that are owned. The same annual report and similar filings  to the Securities and Exchange Commission are required whether the investment fund has $100 million in assets or $500 million. The due diligence required for the investment manager is no different for a large mutual fund than it is for a small one. Modern technology has fully automated such tasks as dividend collection, tax reporting, and client statements." 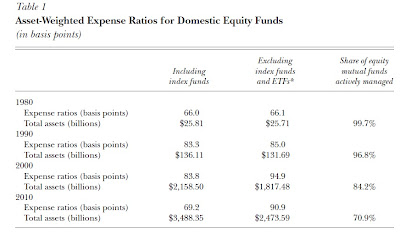 As Malkiel writes: "Surely, there had to be enormous economies of scale that could have been passed on to consumers, resulting in a lower cost of management as a percentage of total assets. But we will see below that the scale economies in asset management appear to have been entirely captured by
the asset managers. The same finding appears to hold for asset managers who cater to institutional investors."

The expense ratios for passively managed funds are often very low, at 7 basis points or less. The expense ratios for actively managed funds alone (shown in the second column of the table) have actually risen from 66 basis points back in 1980 to over 90 basis points as a share of assets in the last decade or so. And remember, this is during a period when economies of scale should have been a force for driving down expenses as a share of assets!


Back in 1973, Burton Malkiel published the first edition of his classic A Random Walk Down Wall Street.  (I think the 9th edition came out a couple of years ago.) The book offers a readable and persuasive statement of the argument that stock prices are based on past information, and that they will rise and fall based on new information. Because new information is, by definition, not predictable (or else it would be part of past information!), stock prices will move up and down unpredictably. Malkiel has been making the case for 40 years that while actively managed equity funds  charge higher fees than passively managed funds, they do not on average have higher returns.  In this essay, he writes:

"Clearly, one needs some active management to ensure that information is properly reflected in securities prices. Those professionals who act to exploit any differential—however small—between price and estimated value deserve to be compensated for their efforts. But it appears that the number of active managers and the costs they impose far exceed what is required to make our stock markets reasonably efficient, in the sense that no clear arbitrage opportunities remain unexploited. Worldwide, vast numbers of highly trained independent experts are expressing estimates of value each day. Outperforming the consensus of hundreds of thousands of professionals at the world’s major financial institutions is next to impossible, as it has been for decades. ... The major inefficiency in financial markets today involves the market for investment advice, and poses the question of why investors continue to pay fees for asset management services that are so high."

I'm sure there are people and institutions that can benefit from sophisticated investment advice that seek to hedge the specific risks they face while leaping to exploit the occasional profit opportunities provided by temporary anomalies in financial markets. But most average investors in actively managed funds are not following this pattern. They are following either their own gut reactions, or the gut reactions of an active portfolio manager, about what is likely to rise and fall. In doing so, they are paying much higher fees over what an index fund would have cost. Malkiel cites one study that found if the average mutual fund investor in actively managed funds had just bought and held a passive index fund from 2000 to 2011, rather than trying to chase every trend, that average investor would have increased return on investment by almost 2 percentage points per year--a gain of more than 20% over the decade.