Steve Henderson of the U.S. Census Bureau pulls together data from the Consumer Expenditure Survey and looks at "Spending on pets." He writes (footnotes omitted):

"Nearly three-quarters of U.S. households own pets. There are about 218 million pets in the United States, not counting several million fish. ... Americans spent approximately $61.4 billion in  total on their pets in 2011. On average, each U.S. household spent just over $500 on pets. This amounts to about 1 percent of total spending per year for the average household. ... Expenditures on pets include pet food, pet purchases, supplies and medicine, pet services, and veterinarian services."

Two comparisons leaped to mind when I saw these figures. First, all through last year there were stories about high spending of the 2012 U.S. election campaign. The Federal Election Commissions reports that about $7 billion was spent. But to put the number in the context of dogs and cats, America spent about nine times as much on pet care as it did on choosing all its federally elections in 2012.

Second, the World Bank often uses a poverty line of $1.25/day in consumption to measure deep destitution in developing countries. Nearly one-third of the population of South Asia and nearly half the population of Africa has a consumption level below this line.  Over 365 days in a year, $1.25/day works out to $456.25.  Thus, the average U.S. household spends more on pets than the poverty line for humans in the developing world. And the statistics don't include the fact that pets live rent-free.

In his short essay, Henderson offers some less combustible comparisons. He writes: 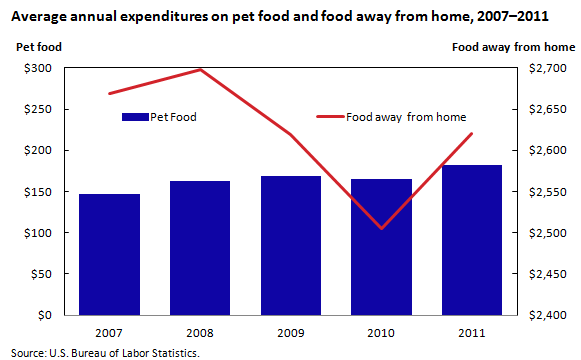 I am deeply aware of all the grim news for the U.S. economy during the last five years. But when the average household is spending $500/year on pets, it's a reminder that America's average standard of living remains quite high.