Will Productivity Growth Leave Us Motherless?

Productivity growth is the main determinant of an overall rise in the standard of living. And whether U.S. productivity growth in the future will be higher, as it was in the second half of the 1990s and into the early 2000s, or lower, as it was during the 1970s and 1980s, is a live controversy.
The Spring 2013 issue of the International Productivity Monitor has a group of lively and readable arguments on both sides.

As a starting point, here's a summary figure from a recent Congressional Budget Office working paper by Robert Shackleton,  "Total Factor Productivity Growth in Historical Perspective."
Notice that productivity growth looks relatively high in the 1960s, then plummets around 1970 and, although the path is a bumpy one, stays relatively low until the mid-1990s. There is then a surge of productivity growth, which has since sagged. Shackleton projects that future productivity growth will sag a bit from its 1960-2010 average, but not by much. The symposium in International Productivity Monitor offers voices on either side of his prediction. 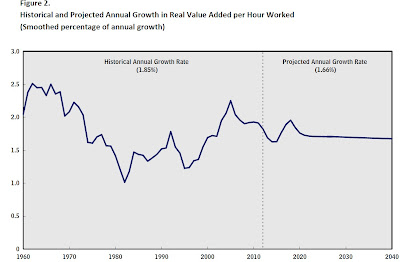 
"[D]igital technology and the digital revolution are proceeding apace, and we also agree that this will eliminate many traditional jobs in manufacturing and elsewhere. But the offset is that innovation-led growth can createnew jobs, new lines of business and new profit opportunities. Indeed, we saw this in the 1990s when innovation-led growth created new products and services and expanded output and new technologies made productivity gains possible, even though many of these were concentrated in certain sectors. Perhaps even more important, today there are large sectors of the economy that have continued to lag behind in productivity growth, notably health care, education, and construction. Adopting best practices and taking advantage of existing technologies can yield substantial productivity gains for the economy. Another important opportunity lies in energy. New technologies have unlocked reserves of natural gas and oil buried deep below the surface and made it possible to extract these reserves at favorable prices. While we do not ignore the environmental challenges inherent in accessing these reserves, we judge that these can be overcome and that natural gas at low prices and a more stable and secure source of oil are becoming available, a revolution that will have a large impact on U.S. productivity and GDP growth."

Some of the innovations they emphasize include industrial robotics, 3D printing, the application of "big data" to product development, supply chains, and production; the "internet of things" in which low-cost sensors from inanimate objects are connected to the internet, allowing continuous adjustments as desired.

The pessimistic role is ably filled by Robert J. Gordon in his essay: "U.S. Productivity Growth: The Slowdown Has Returned After a Temporary Revival." He readily admits that many new technologies are available to help manufacturing, but memorably says that “manufacturing is performing a magnificent ballet on a shrinking stage." In Gordon's view, the short interlude of faster productivity growth from about 1994-2002 is now over. 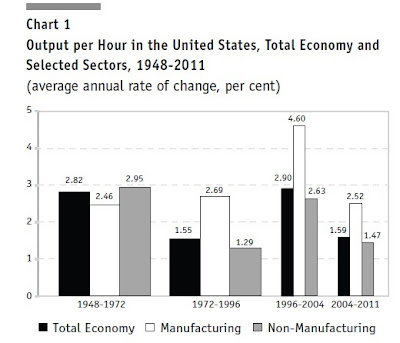 "I have often posed the following set of choices. Option A is to keep everything invented up until ten years ago, including laptops, Google, Amazon, and Wikipedia, while also keeping running water and indoor toilets. Option B is to keep everything invented up until yesterday, including Facebook, iphones, and ipads, but give up running water and indoor toilets; one must go outside to take care of one’s needs; one must carry all the water for cooking, cleaning, and bathing in buckets and pails. Often audiences laugh when confronted with the choice between A and B, because the answer seems so obvious.

"But running water and indoor toilets were not the only inventions between 1870 and 1970 that made it possible for U.S. labour productivity to grow at the 2.48 per cent rate ... The list is endless – electric light, elevators that made possible the vertical city, electric machine tools and hand tools, central heating, air conditioning, the internal combustion engine that replaced the horse, commercial aviation, phonographs, motion pictures, radio, TV, and many others including fundamental medical inventions ranging from aspirin to penicillin. By comparison the computer revolution kick-started productivity growth between 1996 and 2004 for only eight years, compared to the 81 years propelled by the second Industrial Revolution of the late nineteenth century."

Gordon further notes that the U.S. economy faces severe challenges in the years ahead: an aging population, high and rising levels of government debt, high levels of inequality, and a lack of improvement in educational attainment. He writes: " The United States reached an educational plateau more than 20 years ago. It is the only developed nation in which the 55-64 age group is as well-educated as the 25-34 age group. The United States has steadily slipped down the league table of post-secondary education completion and currently registers 15 percentage points lower than Canada."

At least some of this dispute revolves around whether one sees the boost to productivity growth from information technology as a stage that is now largely behind us, or as a long-running play in which we may have only seen the first of several acts. David M. Byrne, Stephen D. Oliner, an d Daniel E. Sichel tackle this question in their paper, ""Is the Information Technology Revolution Over?"

"Just as a long lag transpired from the development of the PC in the early 1980s to the subsequent pickup in labour productivity growth, there could be a lagged payoff from the development and diffusion of extensive connectivity, handheld devices, and ever-greater and cheaper computing power. In 1987, Robert Solow famously said “You see the computer revolution everywhere except in the productivity data.”... [C]computers comprised too small a share of the capital stock in 1987 to have made a large contribution to overall productivity growth. But, several years later, the imprint of the revolution became very evident. In a parallel vein, one could now say: “You see massive connectivity and ever-cheaper computing power everywhere but in the productivity data.” Subsequently, those contributions could become evident in aggregate data."

In a comment on their paper, Chad Syverson points out that the productivity growth in the early 20th century, following the spread of electrical power through the economy, had periods of faster and slower productivity growth. He writes:

"To be clear, I do not interpret this as predicting that labour productivity growth must again accelerate in 2013. ... Rather, I simply make the point that we have been here before: sluggish labour productivity growth at the beginning of the diffusion ofa general purpose technology (if one believes, as I do, that the 1890-1915 period for electrification is a reasonable analog to the 1970-1995 period for IT), a decade-long acceleration, and then another multi-year slowdown. In the electrification era, this was followed by another acceleration. Whether this will also occur for IT remains to be seen, but we know it has happened before. History shows that productivity growth driven by general purpose technologies can arrive in multiple waves; it need not simply arrive, give what it has, and fade away forever thereafter."

As I contemplated these various perspectives, I found myself thinking back to my early years of running the Journal of Economic Perspectives, and in particular to a paper by Zvi Griliches in the Fall 1988 issue called "Productivity Puzzles and R&D:Another Nonexplanation."  (As with all JEP papers from the most recent issue back to the first, this paper is freely available on-line compliments of the American Economic Association.) Griliches makes the case that it's hard to trace the productivity slowdown starting in the early 1970s to changes in R&D spending, and then ends with these thoughts:


"What is then the culprit? Why has productivity grown so slowly in the last decade or so? My prime suspect remains the rise in energy prices and its macro consequences. It is not just that many industries had to face new prices, change the way they used their factors of production, and scrap much of their now unprofitable capacity, but also a long worldwide recession induced by the fall in real wealth caused by OPEC, by the fall in aggregate demand caused by the governments trying to control the resulting inflation, and the subsequent fall in U.S. exports and the increase in import competition in the early 1980s as the result of rising dollar exchange rates. These factors combined together to produce one of the longest worldwide recessions and growth slowdowns from which the world may not yet have emerged. The resulting prolonged periods of capacity underutilization in many industries is the proximate cause of much of the observed declines and slowdowns in productivity growth. ..."

"Of course, there may not be a single cause—one murderer. Perhaps it is more like the Murder on the Orient Express—they all did it! From the longer run point of view there are still lingering doubts about the crime itself: perhaps the 1970s were not so abnormal after all. Maybe it is the inexplicably high growth rates in the 1950s and early 1960s that are the real puzzle. This thought, however, is a sad one. I still hope that when the world finds its way out of this worldwide growth recession, we will find that productivity will bounce back, that it has not left us motherless forever."

Of course, the aftermath of the Great Recession is still upon us, and it is far more severe that the period in the mid-1980s that Griliches was discussing. It seems to me very difficult to draw any firm conclusions about future productivity growth given that economic output was pumped up by the housing boom in the mid-2000s before being crushed by the economic and financial crisis that followed, and its continuing legacy of stagnant growth.

That said, when I discuss future economic opportunities for the U.S., I tend to focus on four areas.

Of course, there are also any number of significant policy challenges in these issues, and in others. But my point is that we are not doomed to a future of low productivity growth. Instead, for better or worse, our economic future is in our own hands.