Mark Dixon of the U.S. Census Bureau has authored  Public Education Finances: 2011. The headline finding is that in 2011, per capita spending on K-12 education declined. The drop was a small one, only about 0.4%, but it's also the first and only drop in the last 40 years. It's yet another symptom of how brutal the Great Recession and its aftermath have been for state and local finances. 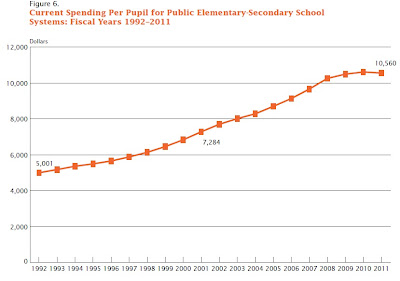 But the other pattern that especially jumped out at me from the report is the difference in what is spent per student across states--a difference that has been large for a long time. Here's a map: 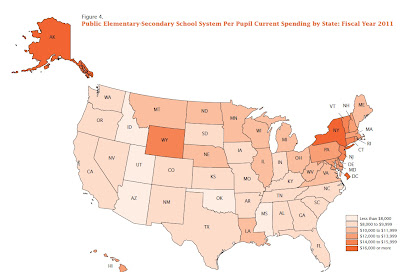 It would of course be a vulgar error to assume that high spending is what's important in K-12 education, when what actually matters is how the students achieve. Spending on education will reflect factors like the local cost of living, the extent of poverty and special needs in the state, and the legacy of past negotiations with the teachers' unions. Still, the discrepancies in what states spend is striking.
Posted by Timothy Taylor at 6:00 AM