Global Urbanization and the Governance Challenge


The overall focus of the Global Monitoring Report, jointly published by the World Bank and the IMF, is on how the world is doing in achieving the "Millennium Development Goals" or MDGs. But the annual reports also look at some particular angle or topic more closely, and the 2013 GMR focuses on urbanization and its linkages to economic development. Here's a taste of some main themes:

"Urbanization matters. In the past two decades, developing countries have urbanized rapidly, with the number of people living in urban settlements rising from about 1.5 billion in 1990 to 3.6 billion (more than half of the world’s population) in 2011. ... Nearly 50 percent of the population in developing countries was urban in 2011, compared with less than 30 percent in the 1980s. Urban dwellers are expected to double between 2000 and 2030, from 2 billion to 4 billion people, and the number of


Chinese urban dwellers will increase from more than 622 million today to over 1 billion in 2030. This trend is not unique to developing countries—today’s high-income countries underwent the same transformation in the 20th century. In fact, virtually no country has graduated to a high-income status without urbanizing, and urbanization rates above 70 percent are typically found in high-income
countries." 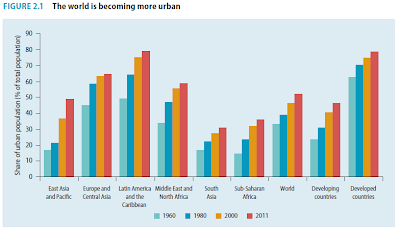 Overall, the report emphasizes that the global shift to urbanization works together with many development goals.

"Cities and towns are hubs of prosperity—more than 80 percent of global economic activity is produced in cities by just over half of the world’s population. Economic agglomeration increases productivity, which in turn attracts more firms and creates better-paying jobs. Urbanization provides higher incomes for workers than they would earn on a farm, and it generates further opportunities to move up the income ladder. Between 1990 and 2008, rural poverty rates were, without exception, higher than urban poverty rates ...

"Location remains important at all stages of development, but it matters less in rich countries than in poor ones. Estimates from more than 100 Living Standard Surveys indicate that households in the most prosperous areas of developing countries such as Brazil, Bulgaria, Ghana, Indonesia, Morocco, and Sri Lanka have an average consumption almost 75 percent higher than that of similar households in the lagging areas of these countries. In comparison, the disparity is less than 25 percent in developed countries such as Canada, Japan, and the United States."

"For example, on average, the cost of providing piped water is $0.70–$0.80 per cubic meter in urban areas compared with $2 in sparsely populated areas. South Asia and Sub-Saharan Africa have the largest rural-urban disparities in all service delivery indicators. The poor often pay the highest price for the water they consume while having the lowest consumption levels. For example, in Niger, the average price per cubic meter of water is CFAF 182 for piped water from a network, CFAF 534 from a public fountain, and CFAF 926 from a vendor. And poor access to basic infrastructure disproportionately affects rural women, because they perform most of the domestic chores and
often walk long distances to reach clean water. ...

But of course, the wave of urbanization is also generating urban slums, which are different than rural poverty,  but pose difficult challenges of their own.

"Slums are the urban face of poverty and emerge when cities are unable to meet the demand for basic services and to supply the expected jobs. A likely 1 billion people live in urban slums in developing countries, and their numbers are projected to grow by nearly 500 million between now and 2020. Slums are growing the fastest in Sub-Saharan Africa, southeastern Asia, and western Asia. Currently, 62 percent of Africa’s urban population lives in slums. ...Those in slums lack ownership of property, or even  clearly legal rentals; poor services of many kinds; informal employment only, lack of access to credit and services."


The issue of slums is in some ways a governance challenge: not just how to provide services in the present to slum-dwellers, but how to establish an appropriate institutional and physical infrastructure.

"Urbanization is largely a natural process, driven by the opportunities cities offer. Unregulated markets are unlikely to get densities right, however, and spontaneous development of cities can create negative side effects such as congestion or, alternatively, excessive sprawl. The consequences are pollution and inefficiencies. Without coordinated actions, cities will lack the proper investments to benefit from positive externalities generated by increased density. Higher-quality construction material and more sophisticated buildings are required to support greater densities, but if these higher
costs must be fully internalized by firms and households, underinvestment is the result. In addition, complementary physical infrastructure is critical: roads, drainage, street lighting, electricity, water, and sewerage, together with policing, waste disposal, and health care. While a market-driven process could possibly gradually increase densities through shifting land values over time, the long-lived and lumpy nature of urban investment often inhibits such a process. A city’s physical structures, once established, may remain in place for more than 150 years....  Under current trends, the expected increases in the urban population in the developing world will be accompanied
by a tripling in the built-up area of cities, from 200,000 to 600,000 square kilometers."

The challenge of thinking about how to address urban slums cannot be overstated. The slums already involve 1 billion people, a total that will grow by over 50% in the next decade. The built-up area of cities in the developing world is likely to triple. And major decisions about physical structure can have a life expectancy of more than a century. There is a delicate balance between needing an overall master plan and needing a lot of a flexibility for evolution and change over time. Even after deciding what to do, financing poses challenges of its own: in particular, how can developing countries establish ways for that poor people  can afford what they need, but also pay what they can afford. Then actually getting projects built is often quite difficult, too.  Urban areas will differ, of course, in their locations and needs. But there is a great need for rules of thumb, and ideas about best practices, that can offer some guidance for the urban developments that lie ahead.