In January, I blogged in "Head Start is Failing Its Test" about a high-quality study being done by the U.S. Department of Health and Human Services, which found: "In summary, there were initial positive impacts from having access to Head Start, but by the end of 3rd grade there were very few impacts found for either cohort in any of the four domains of cognitive, social-emotional, health and parenting practices. The few impacts that were found did not show a clear pattern of favorable or unfavorable impacts for children."

In the most recent issue of the Journal of Economic Perspectives,  Greg J. Duncan and Katherine Magnuson offer a broader and modestly more  hopeful angle in their paper, "Investing in Preschool Programs,"(Like all papers in JEP back to the first issue in 1987, this is freely available on-line compliments of the American Economic Association. Full disclosure: I've been the Managing Editor of JEP since the journal started in 1987.)

One of the main difficulties in evaluating preschool programs is that just comparing children in such  programs and not in such programs won't be a fair approach. After all, families differ in many ways, some of them not easily measureable, and these differences need to be taken into account. Thus, a preferred method is an "experimental" approach, in which out of a group of families, some are randomly assigned to the preschool program and some are not. Of course, one can then look at observable characteristics to see if the assignment was really random: that is, families with children randomly chosen to be enrolled in the preschool program should have the same average income, education level, employment level, proportion of single parents, and so on, compared with the families whose children were not randomly enrolled in the program. But random enrollment also offers a plausible way of adjusting for unobservable differences in families, like the level of emphasis that the family puts on school or persistence or work.

Duncan and Magnuson focus on the studies of preschool done with these kinds of random assignment experimental methods, and identify 84 such studies over the last half-century (including the Head Start study mentioned earlier. They summarize the results of these 84 studies in this figure. 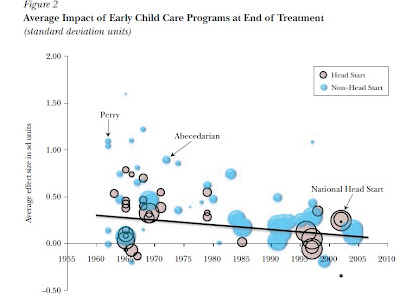 The horizontal axis of the figure shows the year the study was done. The vertical axis shows the size of the effect found in the study, measured as the average of the cognitive and achievement gains found for those attending preschool. For perspective, the achievement gap between black and white .children entering kindergarten is about one standard deviation. Circles with a black outline are Head Start programs. The gains are measured at the end of the preschool enrollment period--before such gains have had a chance to fade out. From this figure and their surrounding discussion, here are some key points:

1) There is evidence of short-term gains from preschool programs.
2) The average level of gains from such programs seems to be falling over time (as shown by the downward-sloping line). This finding is distressing, because one would hope that such programs could become more effective over time. But a likely reason is that parents (especially the mothers) of children in these preschool program are not as deeply disadvantaged in recent years as they were back in the 1960s, when levels of literacy, health, and income were much lower. Because the parents better educated and have higher income, the gains from preschool are smaller.
3) Academic gains from preschool programs tend to fade out. As they write: "Most early childhood education studies that have tracked children beyond the end of the program treatment find that effects on test scores fade over time."
4) However, some very long-term studies have found that although measures of cognitive and achievement gains fade, there are often still observable behavioral effects like improved high school graduation rates, lower rates of teen parenthood, and lower rates of criminal behavior. This finding creates a puzzle, because even with batteries of questionnaires and tests for the children, their teachers, their parents, and others, researchers have not yet been able to measure what it is in preschool programs that might produce these positive long-term results.

So where does all of this mean for proposals for universal preschool, like the "Preschool for All" initiative announced by President Obama along with his 2014 proposed budget? I know that for some people, the word "universal" is a sort of talisman that carries echoes of equality and justice. But it's perhaps worth noting as a starting point that although preschool attendance has been increasing over time, it is far from universal now for any income group. Duncan and Magnuson provide this figure showing the share of 3 and 4 year-olds enrolled in preschool, divided up by income level. Preschool attendance has risen over the decades but it now represents about half of all children. In discussions of "universal" preschool, it's never quite clear to me whether universality is intended to apply to all income levels, or whether only the children of low-income families are to "universally" attend pre-school. 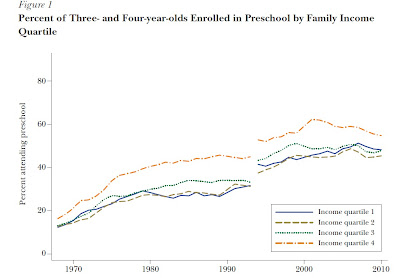 A more detailed look at the studies also suggests that there is no one-size-fits-all universal answer to the best experiences for 3 and 4 year-olds. For example, some of these studies suggest that children from low-income families benefit more than children from high-income families. Often the academic benefits of preschool are higher for girls, but the behavioral benefits are higher for boys. Children with very low birthweights often do not benefit much from preschool, perhaps because low birthweights can be a signal of reduced capabilities. Preschool programs vary quite widely how their teachers are trained, in how their classroom balance academic and emotional needs of children, and in their curriculum.  There are alternative early interventions that may be more productive for some children: for example, home visitation for high-risk, first-time mothers, or interventions for children living in families with documented domestic violence

The word "universal" is no guarantee of quality. After all, we have "universal" K-12 schooling, but that certainly doesn't mean that all children across the United States are in high-quality or even roughly equivalent schools. "Universal" is certain to be costly. There is a strong case for further experiments with an array of early childhood interventions, including preschool, to have a better sense of what works, and why. Right now, the sad truth is that there is so much we don't know.