Mergers and Enforcement in 2012

Each year, the Federal Trade Commission and the Antitrust Division of the U.S. Department of Justice publishes a report required by the Hart-Scott-Rodino Act on merger activity the preceding year. The news from the 2012 report, which is here, is that there isn't much news. The number of mergers in 2012 look a lot like it did in 2011--that is, up from the depths of 2009--but not near the peak of 2007.

Under the Hart-Scott-Rodino legislation, all mergers above a certain size (about $68 million in 2012, rising to $71 million in 2013) are required to notify the antitrust authorities in advance when a merger is proposed. Here's a figure showing merger transactions reported over the last 10 years. 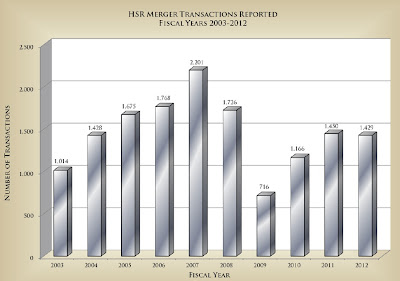 And here's a breakdown by size. There were 156 acquisitions in 2012 that exceeded $1 billion. The very small number of mergers below $50 million, of course, is because it is not required to report these. 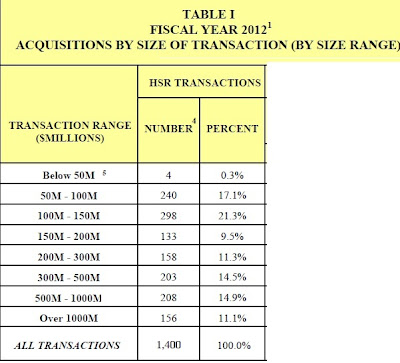 After receiving notification of a proposed merger, the antitrust authorities can allow it to happen, or they can make a "second request" for more information. In 2012, of the 1400 or so proposed mergers, there were second requests in 49 cases--a little over 3%. This percentage may look remarkably low! But remember that companies thinking about a merger have good knowledge about what criteria have been used to judge mergers in the past, and so mergers that would obviously lead to a lot less competition don't get proposed in the first place. Also, remember that the job of the FTC and the U.S. Department of Justice is not to second-guess whether a merger is a wise and sensible business decision. In a market economy, the presumption is that businesses have the freedom to make investment decisions that may turn out to be foolish. Instead, the mission of the FTC is "to prevent business practices that are anticompetitive, deceptive, or unfair to consumers."

With the second request information in hand, the antitrust authorities can then decide whether to let the merger proceed as proposed, to propose that the merger can only be allowed to occur if the company takes some additional action like divesting certain parts, or if the merger should just be blocked outright. In 2012, the FTC brought 25 enforcement actions. None of them rise to the level of the epic lawsuits involving Microsoft, IBM, or AT&T. But they help to set the ground-rules and expectations that competition is important, and where it seems threatened--even on everyday products like sliced bread or sticky notes--the government will push back. Here's a summary of some of the main activities involving mergers in 2012.

"One of the notable matters handled by the Division was United Technologies Corporation’s $18.4 billion acquisition of Goodrich Corporation. The transaction was the largest merger in the history of the aircraft industry. As originally proposed, the acquisition would have resulted in higher prices, less favorable contractual terms and less innovation for several critical aircraft components. The Division challenged the merger in U.S. district court, and the subsequent settlement required UTC to divest assets used in the production of electrical power systems and aircraft engine control systems. ... In addition to UTC, the Division challenged a number of mergers that would have had a direct effect on the pocketbooks of U.S. consumers. The Division challenged, and reached pro-competitive settlements, in mergers involving sliced bread (United States v. Grupo Bimbo, et al.), electricity (United States v. Exelon Corporation, et al.), health insurance (United States v. Humana Inc., et al.) and parking services (United States v. Standard Parking Corporation, et al.). Additionally, 3M Co. abandoned its proposed $550 million acquisition of Avery Dennison Corp.’s Office and Consumer Products Group, its closest competitor in the sale of adhesive-backed labels and sticky notes, after the
Division informed the companies that it would file a lawsuit to block the deal. The transaction would have substantially lessened competition in the sale of labels and sticky notes, resulting in higher prices and reduced innovation for products that millions of American consumers use every day."