I'm conflicted about big-time college sports. I watch them, I enjoy them--and in a number of ways, they seem inappropriate to me as an activity for colleges and universities. The student-athletes often must make an enormous and year-round commitment of time and energy, in a way inevitably creates tradeoffs with the academic and social dimensions of college life. At many large universities, the football and basketball coaches are the highest-paid employees. The spectacle of middle-aged men, like me, yelling at 19 year-old athletes is not edifying. Neither is the spectacle of inebriated students from one school yelling at 19 year-old athletes from other schools. Frankly, the only participants in big-time college athletics who consistently come off well are the athletes themselves.

The NCAA has just released "Revenues and Expenses, 2004-2012, NCAA Division I Intercollegiate Athletics Programs Report." The report is a bunch of detailed tables with a few bullet points. The NCAA divides its Division 1 schools into three groups. The Football Bowl Series is schools with big-time football programs. In  January, Alabama won the football title for this group, beating Notre Dame 42-14. The Football Championship series is medium-level football programs. Last season, North Dakota State beat Sam Houston State 39-13 in the championship game at this level. And the Division 1 schools without football programs include many well-known universities that have scholarship athletes and prominent programs in other sports: Gonzaga and Marquette are two examples.

Here's a table showing median revenues generated by sports activities, along with total spending for these three categories of schools in 2004 and 2012. Generated revenues increased a lot. Spending increased by about the same amount, or more. 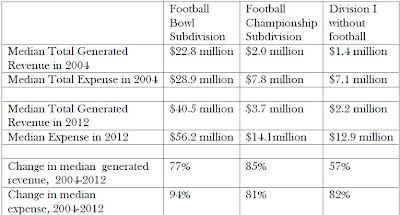 Of course, these figures are medians. Some schools are considerably above the median, while some are below. Here are the medians for each quartile of the Football Bowls Series schools in terms of revenue generated by sports and spending on sports.

1) For all the rhetoric about how athletics serve the larger purposes of academic institutions, the financial numbers tell a different story. The large revenue gains in recent years from reorganizing conferences, renegotiating TV rights, and the like, are by and large not being shared with the academic side colleges and universities. Instead, the additional revenues are being plowed back into the athletics programs.


2) A couple of dozen of the big-time football schools generate enough revenue from sports to cover their athletic department expenses. The median school does not make money in any direct way from its athletics program: instead, it subsidizes these programs. There is perhaps an argument to be made that athletics can encourage alumni donations to other programs, and there are examples of where donations spike for a time when a school's athletics program does unexpectedly well. But I haven't seen persuasive evidence that the median school gets more donations to its academic programs because of its sports teams.

College athletics is a sort of arms race, where institutions that define themselves as focused on "higher education" aggressively pursue sports revenues, and then spend those revenues on sports activities. Of course, the sports revenues are available because of demand from fans, like me, and it's hard to blame colleges for seeking a share of that money. But it's easier to blame colleges and universities for not finding a way to funnel a much larger share of that growing pot of money to what is supposed to be the core academic function of their enterprise.