Should the Unemployed Move to North Dakota?

Living in Minnesota, one hears stories about the economic activity happening in the Bakken formation in western North Dakota and eastern Montana. Stories about people who are paid to drive to work from an hour or more away, because there's not enough housing nearby. Stories about school bus drivers who triple their salary by moving to that area and driving a shuttle to get workers to work sites. With national unemployment remaining stubbornly high, what are the actual job numbers for this area? Should many more of the unemployed be moving to North Dakota? In a short "Beyond the Numbers" briefing paper, Paul Ferree and Peter W. Smith of the Bureau of Labor Statistics review some of the numbers in "Employment and wage changes in oil-producing counties in the Bakken Formation, 2007–2011."

For those of you who are a little fuzzy on your North Dakota geography, here's a map of the counties around the Bakken formation and the job gains in those counties from 2007-2011. 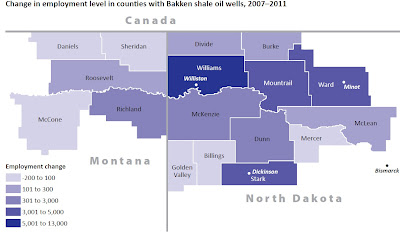 Here's a breakdown by industry of gains in jobs and wages. It's interesting to note that while jobs in mining almost tripled in this time, jobs in "Professional and Technical Services" and in "Transportation and warehousing" actually more than tripled. Also, the gain in wages for mining jobs was actually below the average wage gain for this area, while wages in the "Real estate and rental and leasing" area doubled in this time. 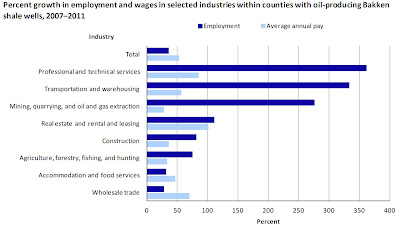 On one level, maybe the most important level, the economic news from the Bakken area seems to me very positive. People have jobs! People are getting higher wages! Many of those jobs are for blue-collar skills that have not been well-rewarded in the U.S. economy in recent years. Sure, there are environmental issues worth discussing, but they can be managed. In addition, I'm sure the jobs and wages in the Bakken area are also supporting jobs and wages in other areas for suppliers, transporters, and energy users. Expanded energy production offers a real opportunity for jobs and growth in the U.S. economy, at a time when such opportunities are not thick on the ground.

That said, it clearly lacks numerical perspective silly to say that America's unemployed should all be headed for Williston, North Dakota. The boom from 2007-2011 added less than 30,000 jobs in this area, while the U.S. economy has about 11.7 million unemployed people. In addition, although some of the job gains are for blue-collar workers, a number of the additional jobs are going to those with specific professional and technical skills--or those with detailed knowledge of the local real estate market.  Ultimately, I suspect that the direct economic effects of the oil shale boom in the Bakken area and elsewhere in North America may be smaller than the indirect effects of those increased domestic energy supplies on the rest of the economy.
Posted by Timothy Taylor at 6:00 AM