The Third Age of Financial Globalization

Here are the three ages of financial globalization, according to the Global Development Horizons report from the World Bank on the theme "Capital for the Future: Saving and Investment in an Interdependent World"  (as usual, citations and footnotes are omitted for readability).

"During the First Age of Financial Globalization, starting in the second half of the 19th century, large amounts of capital were directed from European countries to the New World, mostly for investment in railways, real estate, and large-scale agricultural projects. By the start of World War I in 1914, more than one-quarter of British wealth was invested outside of Great Britain, mainly in foreign government securities and railroads. In 1913, almost half of Argentine and one-fifth of Australian capital stock was owned by foreign investors in Europe. This age wound down as European countries dramatically reversed their nondefense capital outflows during World War I ...

"Progress toward full capital market liberalization among developed countries took a large step forward in the post–Bretton Woods period, which may be regarded as the Second Age of Financial Globalization. Obligations under the Organisation for Economic Co-operation and Development’s Code of Liberalization were broadened to include virtually all capital movements, including short-term transactions by enterprises and individuals. Rapid globalization in the financial industry in the 1990s and 2000s brought even more dramatic change to the landscape of the global financial system, not only encouraging steep increases in cross-border capital fl ows as money market instruments, forwards, swaps, and other derivatives were created, but also allowing developing countries to be integrated into the global financial system in earnest.

At present, the world appears to be in a transition into a Third Age of Financial Globalization. The beginnings of this shift would likely have occurred in the early 2000s as developing countries became more integrated into the global fi nancial system and capital inflows to them became significant in absolute terms for the first time. The trend became more noticeable during the global financial crisis, when gross inflows of capital to developing countries declined much less than inflows to advanced countries ... [D]eveloping countries will likely account for a steadily increasing share of inflows in the future—a continuation of the trend that began in the precrisis years." 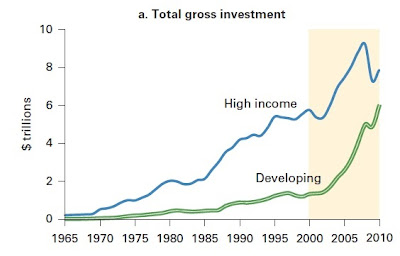 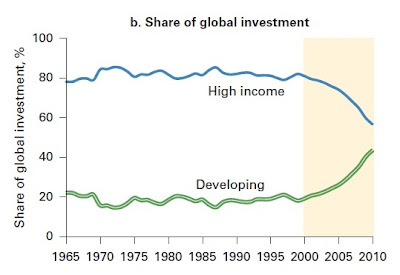 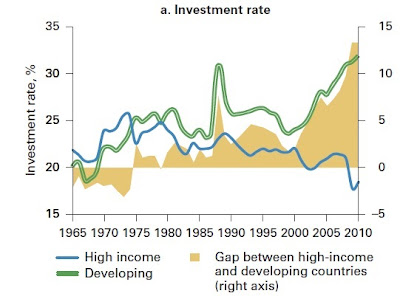 Now switch over to the savings side. The top graph shows that world saving as a share of global income hasn't changed much since 1980, but the share of that saving coming from developing countries has risen dramatically. 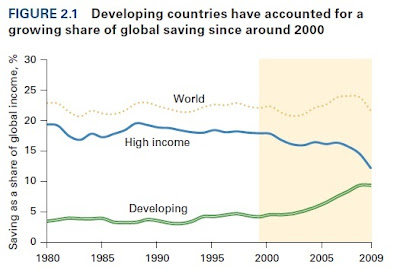 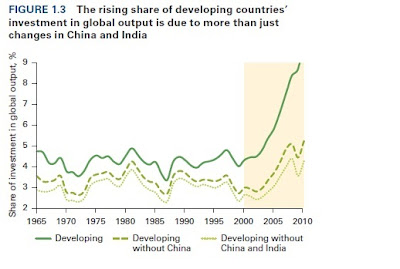 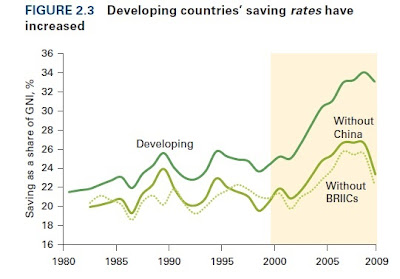 A few decades ago, it was common to be taught that low-income countries were trapped by their low rates of saving and investment, and their inability to attract foreign capital. Maybe the trap was real a few decades ago, but it's a trap that is being shattered in this Third Age of Financial Globalization.