What If You Aren't the Average College Student?


The offices of high school guidance counselors and directors of college admissions are full of statistics about how the average person with a college degree earns much more than the average person with a high school degree. But making any decision based on averages is a tricky business. After all, college itself is not a a single experience. There are a wide array of public and private schools, with different costs. There are a wide array of fields of study, with very different job prospects. Schools vary considerably according to what share of their students graduate. And even further, high school students are very different from each other. If you have been a 30th percentile high school student, it is perfectly reasonable to wonder whether you are going to be an average college student.

Stephanie Owen and Isabel V. Sawhill draw upon a wide array of research on many of these questiosn in their essay, "Should Everyone Go To College?" written for the Center on Children and Families at the Brookings Institution. As they note at the start:

"There is enormous variation in the so-called return to education depending on factors such as institution attended, field of study, whether a student graduates, and post-graduation occupation. While the average return to obtaining a college degree is clearly positive, we emphasize that it is not universally so. For certain schools, majors, occupations, and individuals, college may not be a smart investment. By telling all young people that they should go to college no matter what, we are actually doing some of them a disservice."

Here are a few of their figures that especially jumped out at me. First consider the average return on investment for a bachelor's degree from a range of schools, either more or less competitive in their admissions, and either public or private--where the public schools are less expensive and thus have a higher return. On average--and there's that word "average" again--the return to competitive public schools is more than twice as high as the return to noncompetitive non-for-profit private school. 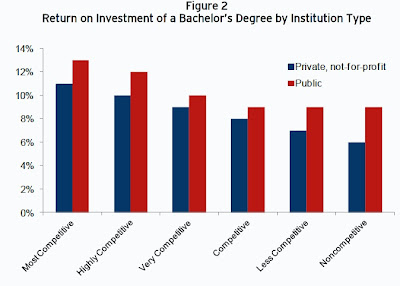 In discussing school by school data, they write: "[N]ot every bachelor’s degree is a smart investment. After attempting to account for in-state vs. out-of-state tuition, financial aid, graduation rates, years taken to graduate, wage inflation, and selection, nearly two hundred schools on the 2012 list have negative ROIs [return on investments]. Students may want to think twice about attending the Savannah College of Art and Design in Georgia or Jackson State University in Mississippi."

One problem that seems especially underestimated to me is the issue of whether a student who enrolls as a freshman is likely to complete a degree. The wage payoffs from dropping out are not encouraging, but any loans taken out while still a student will linger on. Here is a figure showing the graduation rate after six years. At noncompetitive schools the average graduation rate is a frighteningly low 35%. And the bottom of the "maximum/minimum" lines show that schools vary widely on this dimension. Frankly, even if you find your plans are taking you to a college or university that is not very competitive, it's not hard to look up the graduation rate, and there's just no reason to choose an institution where only a third or less of the students will get a degree 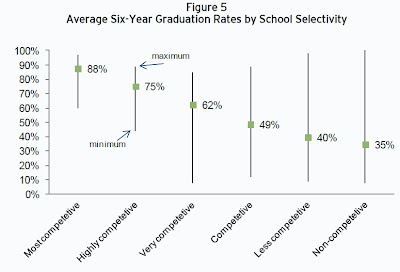 ewer than 60 percent of students who enter four-year schools finish within six years, and for low-income students it’s even worse.

Owen and Sawhill write: "Again, the variation in this measure is huge. Just within Washington, D.C., for example, six-year graduation rates range from a near-universal 93 percent at Georgetown University to a dismal 19 percent at the University of D.C. Of course, these are very different institutions, and we might expect high-achieving students at an elite school like Georgetown to have higher completion rates than at a less competitive school like UDC. In fact, Frederick Hess and his colleagues at AEI have documented that the relationship between selectivity and completion is positive, echoing other work that suggests that students are more likely to succeed in and graduate from college when they attend more selective schools. At the most selective schools, 88 percent of students graduate within six years; at non-competitive schools, only 35 percent do."

Finally, within schools there is a choice of field of study. Those who major in science, engineering, math, or business are likely to do much better than those who focus on arts or education. 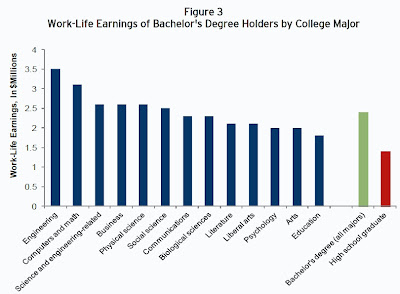 Indeed, the wage premium for being in a science and technology industry can be more important than the gains from a four-year college degree. Owen and Sawhill write: "Anthony Carnevale and his colleagues at the Georgetown Center on Education and the Workforce use similar methodology to the Census calculations but disaggregate even further, estimating median lifetime earnings for all education levels by occupation. They find that 14 percent of people with a high school diploma make at least as much as those with a bachelor’s degree, and 17 percent of people with a bachelor’s degree make more than those with a professional degree. The authors argue that much of this finding is explained by occupation. In every occupation category, more educated workers earn more.But, for example, someone working in a STEM job with only a high school diploma can expect to make more over a lifetime than someone with a bachelor’s degree working in education, community service and arts, sales and office work, health support, blue collar jobs, or personal services."

The recommendations that follow from this kind of essay are straightforward. Look at public schools, for their lower cost. Look  at graduation rates, no matter what the selectivity of the institution. Even if math, business, computers and science are not your first love, or your second or third, it is foolish not to spend some of your time in college getting a basic grounding in at least some of these areas.

For more on these issues, I recommend  the article by Christopher Avery and Sarah Turner in the Winter 2012 issue of my own Journal of Economic Perspectives: "Student Loans: Do College Students Borrow Too Much—Or Not Enough?" In my blog post about that article here, I wrote:

"About 60% of high school students go on to college. For the purposes of a quick-and-dirty estimate, let's say that it's the top 60% by academic qualifications. Thus, if you are at, say, the 70th percentile of your high school class, you are in the middle of those going on to college. Given that many of those who go on to college don't finish a degree, being at the 70th percentile of your high school class may mean that you can expect to be ranked in the bottom quarter of those who complete a college degree. Sure, some students will improve dramatically from high school to college, but it's a statistical fact that half of college graduates will be below the median, and one-fourth will be in the bottom quarter, and especially if you are advising a large number of high school students, it's unrealistic to tell each of them that that they can all end up in the upper part of the college distribution."

In fact, it's unrealistic for high school guidance counselors and college admissions officers to tell everyone that they can all be average. Statistically speaking, they can't.