The Global Wage Report 2012/13 from the International Labour Organization has this useful figure comparing minimum wages across high-income countries. 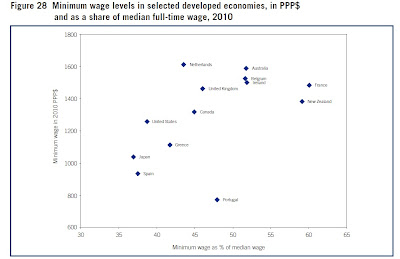 The vertical axis shows the minimum wage converted to dollars (using the purchasing power parity exchange rate). By this measure, the U.S. minimum wage is middle-of-the-pack, above Japan and similar to Canada, although well below the United Kingdom, France, Australia, and Netherlands.