Why Did the U.S. Financial Sector Grow?

It's widely known that the U.S. financial sector has grown substantially in recent years. But by how much? And in what specific areas? Robin Greenwood and David Scharfstein offer a useful breakdown in "The Growth of Finance," which appears in the most recent (Spring 2013) issue of my own Journal of Economic Perspectives. Like all JEP papers from the most recent back to the first issue in 1987, it is freely available on-line compliments of the American Economic Association. Greenwood and Scharfstein write at the start: "During the last 30 years, the financial services sector has grown enormously. This growth is apparent whether one measures the financial sector by its share of GDP, by the quantity of financial assets, by employment, or by average wages. At its peak in 2006, the financial services sector contributed 8.3 percent to US GDP, compared to 4.9 percent in 1980 and 2.8 percent in 1950."

But what is actually meant by "the finance sector"?  Here's a useful figure dividing the sector into three parts: securities, credit intermediation, and insurance. 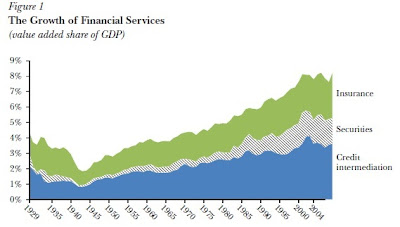 
"The securities subsector ... includes the activities typically associated with investment banks (such as Goldman Sachs) and asset management firms (such as Fidelity). These activities include securities trading and market making, securities underwriting, and asset management for individual and institutional investors. The credit intermediation industry performs the activities typically associated with traditional banking—lending to consumers and corporations, deposit taking, and processing financial transactions."


The authors turn over the available evidence on what happens within these sectors over time (and no, this sort of data is not easily available), and argue (citations omitted here and throughout):

"Our main finding is that much of the growth of finance is associated with two activities: asset management and the provision of household credit. The value of financial assets under professional management grew dramatically, with the total fees charged to manage these assets growing at approximately the same pace. A large part of this growth came from the increase in the value of financial assets, which was itself driven largely by an increase in stock market valuations (such as the price/earnings multiples). There was also enormous growth in household credit, from 48 percent of GDP in 1980 to 99 percent in 2007. Most of this growth was in residential mortgages. Consumer debt (auto, credit card, and student loans) also grew, and a significant fraction of mortgage debt took the form of home equity lines used to fund consumption. The increase in household credit contributed to the growth of the financial sector mainly through fees on loan origination, underwriting of asset-backed securities, trading and management of fixed income products, and derivatives trading."


Their conclusions on these points are balanced, but lean toward the view that even if much of the growth in financial services has been productive, it went too far on the margin. They write:


"Thus, any assessment of whether and in what ways society benefited from the growth of the financial sector depends in large part on an evaluation of professional asset management and the increase in household credit. In our view, the professionalization of asset management brought signififi cant benefits. The main benefit was that it facilitated an increase in financial market participation and diversification, which likely lowered the cost of capital to corporations. Young firms benefited in particular, both because they are more reliant on external financing and because their value depends more on the cost of capital. At the same time, the cost of professional asset management has been persistently high. While the high price encourages more active asset management, it may not result in the kind of active asset management that leads to more informative securities prices or better monitoring of management. It also generates economic rents that could draw more resources to the industry than is socially desirable."

"While greater access to credit has arguably improved the ability of households to smooth consumption, it has also made it easier for many households to overinvest in housing and consume in excess of sustainable levels. This increase in credit was facilitated by the growth of “shadow banking,” whereby many different types of nonbank financial entities performed some of the essential functions of traditional banking, but in a less-stable way. The financial crisis that erupted late in 2007 and proved so costly to the economy was largely a crisis in shadow banking."

The Spring issue of the JEP actually includes four other papers with varying perspectives on the growth of the financial sector. In the next couple of days, I'll post about some of these very divergent views.

But as a prelude, I'll point out that most of the time, when economic activity grows in a certain area, those of us who believe in economic prosperity tend to view that growth as a good thing. If the U.S. car industry or computer industry racked up large sales, that would be viewed in a positive light. Clearly, many people feel differently about the financial sector. But is that negative reaction just a manifestation of the long-standing generalized prejudice against finance? After all, I'm delighted that I can put my retirement savings into a no-load mutual fund, and that I don't have to try to construct and manage such a fund on my own. I'm delighted when it's easy for me to get a mortgage.