China and the Environmental Kuznets Curve

The original Kuznets curve posited, back in 1955, that inequality of incomes would follow an inverted-U pattern as a nation's economy developed, first rising, and then declining. In 1955, this looked reasonable! The "environmental Kuznets curve" suggests that pollution may follow an inverted-U pattern as a nation's economy develops. Pollution first rises as a low income nation industrializes with few limitations on pollution. But then the nation becomes better-off and more able and willing to pay the costs of limiting pollution, and the nation's economy shifts from industry to services, and pollution levels fall. For a useful overview article, Susmita Dasgupta, Benoit Laplante, Hua Wang, and David Wheeler wrote on "Confronting the Environmental Kuznets Curve" in the Winter 2002 issue of the Journal of Economic Perspectives. (Like all articles in JEP, it is freely available online compliments of the American Economic Association. Full disclosure: I've been the Managing Editor of JEP for the last 26 years.)

Of course, the environmental Kuznets curve is a theory that needs to be supported or refuted with evidence, not a law of nature like the boiling point of water, and it's a theory that is under ongoing discussion and debate. And the experience of China, with its burgeoning economy and extraordinary environmental issues, is at the center of the debate. Dasgupta, Laplante, Wang, and Wheeler offer a summary of some possible outcomes in this diagram. 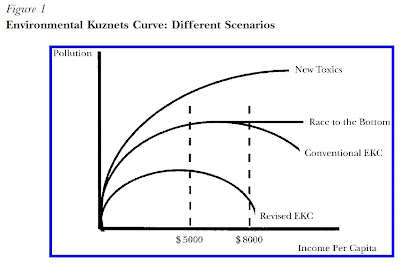 The conventional environmental Kuznets is that emissions of pollutants rise up until some level between about $5000 and $8000 in per capita income, and then fall after that point. There is some historical evidence to support this claim. However, skeptics suggest that even if some pollutants are reduced, new toxic materials are often created that continue to increase. Or perhaps a "race to the bottom" will occur, in which pollution levels first rise, but then society becomes unwilling to act to reduce pollution, for fear that economic activity will decline or depart, and so pollution doesn't fall.

On the other side, optimists point out that countries which are currently industrializing can draw on the anti-pollution technology and legislative experience of other countries, and thus may be able to find ways to increase pollution by less than historical experience, and have the peak of the environmental Kuznets curve at a lower level of per capita income.

According to the World Bank, China's per capita GDP was $5,445 in 2011, so it is just reaching the levels where its pollution should first start to level off, and then to decline. Sam Hill has published a report called "Reforms for a Cleaner, Healthier Environment in China" as a working paper for the OECD economics department. It can be read for free on-line via a clunky browser here.

China's environmental problems have enormous costs. Hill writes (citations omitted): "Combined health costs from PM [particulate matter] and water pollution reached nearly 4% of GNI by the late 2000s. The cost of CO2 emissions ... together with material damage from air pollution and soil nutrient depletion, adds some 2.5% of GNI. Incorporating additional costs associated with energy and mineral depletion brings the total costs of environmental degradation to around 9% of GNI." With costs this high, even cold-blooded analysis by those who do not hug trees in their spare time will justify a greater degree of environmental protection.

Interestingly, there are signs that for some pollutants, the level of pollution is no longer rising with the growth of China's economy. For example, here's a figure about air pollution. The top line shows the growth of GDP. Emissions of  sulfur dioxides and soot have not been rising with GDP, and even emissions of carbon dioxide have been lagging behind the rise in GDP in the last few years. 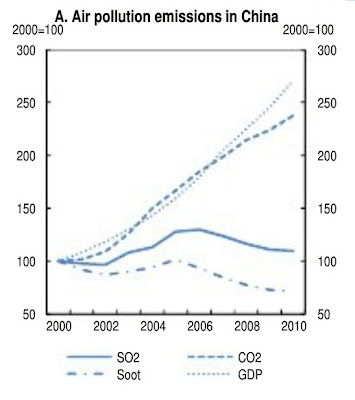 Here's a similar figure for water pollution. Chemical oxygen demand (COD) measures the level of organic pollutants in water. Both that measure and wastewater are at least not rising at the same pace as GDP. 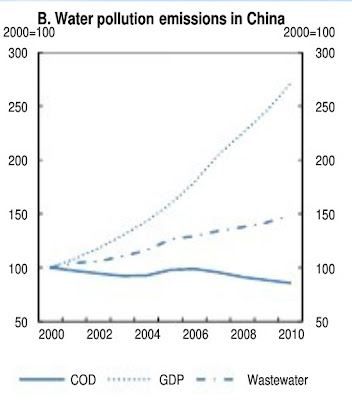 It remains true that China's amount of pollution relative to its economic output is high by the standards of high income countries. Here's a graph showing measured for sulfur dioxide and nitrogen oxides. The following graphs show a measure for carbon dioxide. China's pollutants relative to its level of GDP remain high in part because its economy is just starting a transition from manufacturing to services, and in part because environmental rule and regulations in China are looser and more lightly enforced. 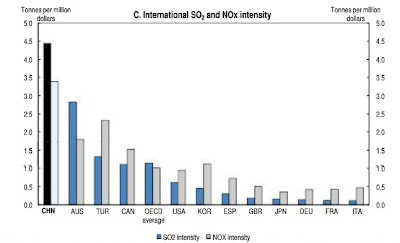 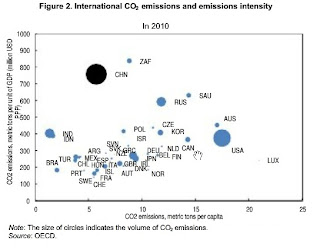 The policy prescription for reducing pollution in China is clear enough: close down older facilities, and make sure their replacements have up-to-date anti-pollution equipment; keep building sewage treatment facilities; put a price on polluting activities to encourage conservation; and so on. Sam Hill's paper has details.