Boone and Johnson on the euro situation

Peter Boone and Simon Johnson have written an insightful and well-informed essay, "Europe on the Brink." The whole thing is well worth reading, but here are a couple of points that especially struck me.

What are the immediate financing needs for European countries? "The ability to refinance or roll over debt is a much clearer concept, and it is this need for liquidity that breaks nations and pushes them into default. Figure 2 shows rough estimates of the financing needs for some euro area countries over the next year to cover debt falling due plus the budget deficit. There is wide variance in amounts due, ranging from 7 percent of GDP for Austria to one–third of GDP for Greece. Because all these nations are running budget deficits, none of them can source this financing from their revenues." 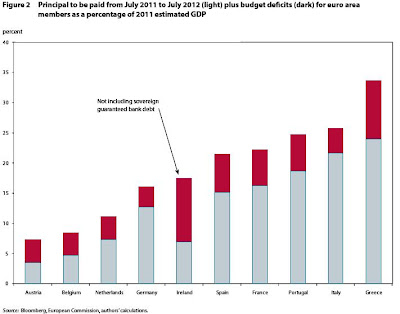 The European Central Bank is already providing financing to sustain various European nations through its payments mechanism. "The ECB operates a payment system that nets out transactions across borders. When, for example, there is more money flowing out of Irish banks into German banks, the Irish central bank incurs a liability to the Bundesbank. The Bundesbank claims on Ireland could be repaid by the Central Bank of Ireland, for example by selling holdings of gold or other valuable assets, but this is not done. Instead, the balances continuously build up and they become
financing to the Irish banking system. Figure 3 shows the current status of this financing at the end of 2010. It illustrates that the Bundesbank is the largest creditor to the system, being owed €340 billion, while the central banks of GIIPS are the largest debtors. The total credit to GIIPS is €336 billion, which is more than the combined value of all the bailout packages to Greece plus the European Financial Stability Facility, the rescue fund backed by euro area nations. The credits are provided with no approval required from national parliaments or budgets, and there is an implicit assumption that all will be fully repaid. These correspondent account balances are critical to the functioning of the euro system. If some central banks decided they would no longer accept claims from another central
bank—let us say, hypothetically, the Bank of Ireland—this would effectively end the euro area. If euros held in Irish banks become less useful than euros held in German banks, the price
of the two will diverge." 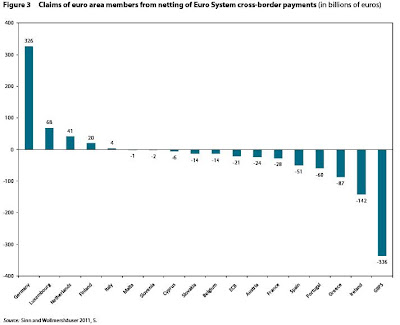 Emerging nations get into international financial crises because they need to borrow in a currency that is not their own. As a result, when it comes time to repay and a crisis is near, they cannot print additional money, and their central bank cannot act as a lender of last resort in the currency in which they have borrowed. In a real way, nations of Europe that have borrowed in euros find themselves in this same position: that is, they have borrowed in a currency, euros, which they themselves do not control, and where the central bank controlling that currency is unwilling to act as their lender of last resort. Boone and Johnson write:

"The problem the euro area faces is that creditors lent money to banks and the sovereign under the assumption that they would all be supported fully during periods of trouble. Led by Germany, the euro area is now switching from a “moral hazard” regime to new arrangements under which all nations must fend for themselves. The stated reason is that these nations will otherwise spend too much and become insolvent. ... It becomes increasingly likely that no lender of last resort exists in the euro area, making it more like a typical emerging market than a developed nation. Emerging markets succumb to defaults because they borrow in currencies which they cannot print. The defaults occur when the nation runs out of foreign currency with which to make payments on its debt. Such nations typically have low debt levels relative to income and modest short–term debt, compared with the 85 percent debt/gross domestic product average in the euro area. If the Germans get their way, we should compare euro area deficits and debt levels to emerging markets, not to other developed nations with their own printing presses and domestic debt."