Much of the literature on international migration takes the perspective of the receiving county: for example, how might immigrants into the United States be affecting wages for U.S. citizens or government budgets. The Summer 2011 issue of my own Journal of Economic Perspectives has a three-paper symposium on emigration--that is, looking at international migration from the perspective of the migrants themselves and the sending countries. Here are some highlights:

1) Allowing much higher levels of international migration could provide gains to the migrants themselves that are enormous relative to size of world GDP. Michael A. Clemens offers a striking back-of-the-envelope calculation in "Economics and Emigration: Trillion-Dollar Bills on the Sidewalk?" Clemens writes:

"Divide the world into a “rich” region, where one billion people earn $30,000 per year, and a “poor” region, where six billion earn $5,000 per year. Suppose emigrants from the poor region have lower productivity, so each gains just 60 percent of the simple  earnings gap upon emigrating—that is, $15,000 per year. This marginal gain shrinks as emigration proceeds, so suppose that the average gain is just $7,500 per year. If half the population of the poor region emigrates, migrants would gain $23 trillion—which is 38 percent of global GDP. For nonmigrants, the outcome of such a wave of migration would have complicated effects: presumably, average wages would rise in the poor region and fall in the rich region, while returns to capital rise in the rich region and fall in the poor region. The net effect of these other changes could theoretically be negative, zero, or positive. But when combining these factors with the gains to migrants, we might plausibly imagine overall gains of 20–60 percent of global GDP."

Of course, Clemens goes into considerably more depth in the article, and argues that gains of this magnitude are plausible given the studies that have been done and the current state of knowledge of this area. I would emphasize further that many studies of migration look either at effects on those in the receiving country, or on those in the sending country, but somehow seem to leave out the gains to the migrants themselves--which may well be the dominant part of a broad social welfare calculation.

2) Remittances sent back to their country of origin by migrants now top$300 billion per year. Dean Yang discusses this point in "Migrant Remittances," along with going into more detail on why remittances are sent and how they are used. Yang offers this striking figure comparing the level of remittances over time to official development assistance, foreign direct investment, and portfolio investment. He writes: "But since the late 1990s, remittances sent home by international migrants have exceeded offifi cial development assistance and portfolio investment, and in several years have approached the magnitudes of foreign direct investment flows." 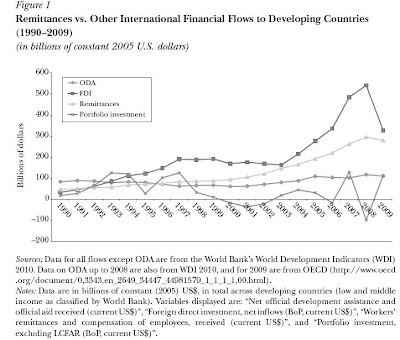 Yang also provides a table showing which countries depend most heavily on remittances, including 22 countries where remittances are more than 10% of GDP. 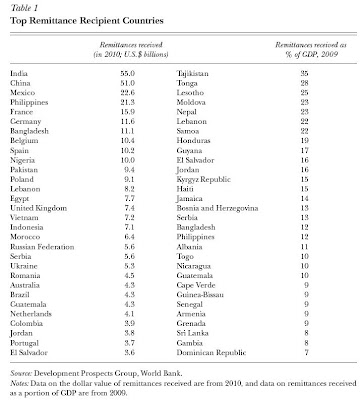 3) Brain-drain is a beg-the-question label for a phenomenon whose importance has not been demonstrated. One common concern about rising global migration is whether it will impoverish sending countries through loss of skilled labor. John Gibson and David McKenzie tackle this question in "Eight Questions about Brain Drain."  They write:

The term “brain drain” dominates popular discourse on high-skilled migration, and for this reason, we use it in this article. However, as Harry Johnson (1965, p. 299) noted, the term brain drain “is obviously a loaded phrase, involving implicit definitions of economic and social welfare, and implicit assertions about facts. This
is because the term ‘drain’ conveys a strong implication of serious loss.” It is far from clear such a loss actually occurs in practice; indeed, there is an increasing recognition of the possible benefits that skilled migration can offer both for migrants and for sending countries. Thus, Prime Minister Manhoman Singh of India recently said: “Today we in India are experiencing the benefifi ts of the reverse flow of income,
investment and expertise from the global Indian diaspora. The problem of ‘brain drain’ has been converted happily into the opportunity of ‘brain gain’ ..."

Also, I hadn't known: "The term “brain drain” was coined by the British Royal Society to refer to the
exodus of scientists and technologists from the United Kingdom to the United States
and Canada in the 1950s and 1960s."