The Dispute over "Core Inflation"

Is there a danger of inflation taking off? When the price of gasoline and food shoot through the roof, it seems like it. But central bank officials calmly comment that it makes more sense to focus on "core inflation," which strips out energy and food prices, on the grounds that these prices fluctuate a relatively large amount, and thus give a distorted view of the inflation that is actually occurring. Of course, this leads a lot of distraught citizens to respond that they have to pay for energy and food, whether the central bank thinks that those prices are relevant or not.


As a starting point, here's a figure from Liu and Weidner showing headline and core inflation over time. 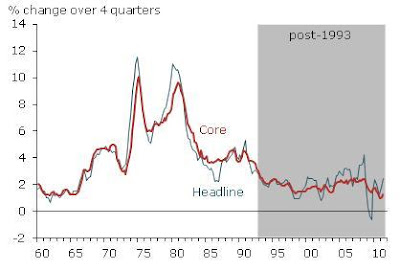 
3) Are movements in energy and food prices just adding volatility to measured of inflation, before they return to near long-run levels, or are they in the middle of ongoing trends? Bullard warns that we have common examples of long-term trends in certain price levels, and so this possibility shouldn't be disregarded. "One might also reasonably question the “temporary” characterization of the shift in energy and other global commodity prices. It is certainly true that we should not expect energy prices to increase faster than the general price level without limit. But it is also true that there are wellknown
examples of long-term secular trends in certain prices. One example is medical care prices, which for decades have generally increased faster than the headline CPI index. Another example is computing technology, where prices have more or less continuously declined per unit of computing power, even as other prices have continued to rise. So it is possible—and indeed it does happen—that whole sectors of the economy experience relative price change."


My own sense is that its almost always possible to construct a situation in which an overly mechanical rules for central bank behavior won't work well. The central bank should certainly look at what factors are affecting headline inflation, and adjust its reactions in light of which factors seem to be operating. Such adjustments will sometimes have the affect of looking at "core inflation." But announcing publicly that core inflation is your goal and defending that goal in front of incredulous citizens and reporters seems overly rigid and a certain PR disaster.

Fear of inflation really should the least of our economic troubles during this Long Slump of a quasi-recovery. Indeed, a bit more core inflation would cut real wages, which might help a bit in increasing hiring. It  would reduce the federal debt burden as a share of GDP (because past debts could be repaid in inflated dollars). It would made a deflationary scenario much less likely, which allow the Federal Reserve to stop running near-zero interest rates and start getting the financial sector back on a more normal footing. A few weeks back I asked one of my macroeconomist friends whether we should be worried about a resurgence of inflation. He replied: "We should be so lucky."