Can Bernanke Unwind the Fed's Policies?

The Federal Reserve has taken five main policy steps since the financial crisis started to become apparent in late 2007. I supported each of those five steps when they were taken, given the economic situation at the time. But the recession and financial crisis were largely over in June 2009, even if what followed has been an unpleasantly stagnant recovery. The Fed needs to be clear that as conditions warrant, it will be willing to unwind its earlier policies. Thus, when the Fed Open Market Committee announced last week on a 7-3 vote that it would extend its near-zero federal funds interest rates for the next two years, it seemed to me a misstep.  Narayana Kocherlakota, who moved from a position as professor of economics at the University of Minnesota to become President of the Minneapolis Federal Reserve, took the unusual step of explaining publicly why he dissented, and even recording a short video clip of his explanation, which is posted at the Minneapolis Fed website.


But I'm getting ahead of the story. Here are the Fed's five main policy steps since 2007.

1) From May 2006 through September 2007, the federal funds interest rate was about 5%. As the financial crisis began to become apparent in fall 2007 and as the recession started in December 2007, the Fed cut the federal funds rate to 2% by April 2008, where it remained until September 2008. This change can be thought of as the standard Fed reaction to a recession. As Rick Mishkin, who was a member of the Fed Board of Governors at the time, notes an article in the Winter 2011 issue of my own Journal of Economic Perspectives, even in late summer 2008 mainstream forecasters like the Congressional Budget Office were predicting only a short, shallow recession. Rick wrote: " In summer of 2008, when I was serving on the Federal Reserve Board of Governors, there was even talk that the Fed might need to raise interest rates to keep inflation under control."

2) When the financial crisis hit with hurricane force in September 2008, the Fed then took the federal funds target rate down to near-zero. As noted earlier, at its August 9 meeting last week, the Open Market Committee voted to keep this interest rate target for two more years, at which time the policy of a near-zero federal funds rate would have lasted about five years.

3) Starting in late 2007, the Fed created a veritable alphabet soup of lending agencies to provide short-term credit lines to banks, other financial institutions, and players in key credit markets. These include: the Term Auction Facility (TAF); the Term Securities Lending Facility (TSLF); the Primary Dealer Credit Facility (PDCF); the Asset-Backed Commercial Paper Money; the Market Mutual Fund Liquidity Facility (AMLF);
the Commercial Paper Funding Facility (CPFF); the Money Market Investor Funding Facility (MMIFF); the and Term Asset-Backed Securities Loan Facility (TALF). For a readable overview of these efforts aimed at teachers of economics,  this is a good starting point. From my point of view, the key fact about all these agencies is that they have all been closed down. Thus, I consider them a success. They helped to assure that short-term credit was available during a financial crisis, and then they went away.

4) The Fed started buying mortgage-backed securities early in 2009. At this time, in the depths of the financial crisis, the high level of uncertainty over what these securities were truly worth was in danger of making the market for these securities illiquid, which in turn could have made the financial crisis even worse. As the New York Fed explains: "The FOMC directed the Desk to purchase $1.25 trillion of agency MBS [mortgage-backed securities]. Actual purchases by the program effectively reached this target. The purchase activity began on January 5, 2009 and continued through March 31, 2010. ... On August 10, 2010, the FOMC directed the Desk to keep constant the Federal Reserve’s holdings of securities at their current level by reinvesting principal payments from agency debt and agency MBS in longer-term Treasury securities. As a result, agency MBS holdings will decline over time."

5) The Fed started buying and holding new Treasury debt. The Fed has always held some Treasury debt as part of its normal operations, and in particular as part of carrying out its open market operations and buying and selling bonds. But that amount swelled from about $480 billion back in summer 2008 to about $1.6 trillion now. The Federal Reserve now holds more in U.S. Treasury debt than the China and Japan combined. While the plan to purchase more Treasury debt known as QE2 (that is, "quantitative easing part 2") officially stopped at the end of June, as noted a moment ago, the Fed is now moving from holding mortgage-backed securities to holding Treasury debt, in such a way that its overall holdings of financial securities does not decline.

Overall, here's where the Fed stands in unwinding the crisis-driven policies enacted since 2007. The many short-term lending facilities have been phased out. The ownership of mortgage-backed securities is being phased down. What is not yet being phased down are the ultra-low interest rates and buying Treasury securities. I'm not brash enough to say just when these policies should be reversed, but I do know this: A central bank can't just keep pumping out money and credit until  unemployment is back to normal levels and hearty growth has resumed. At that point, the central bank has overreacted, potentially by a lot. When the Fed decides that it is time to change these policies, the U.S. probably won't be at full employment and resurgent growth--and so its decision is certain to be controversial.


Here's a graph showing the effective federal funds interest rate since the 1950s, using the ever-helpful FRED website at the St. Louis Fed. Notice that when recessions (the shaded bars) occur, the Fed typically cuts this interest rate, but then when recovery has begun, it raises the rate again. But now the federal funds rate has been at a rock-bottom near zero for more than two years, and in its August 9 meeting, the Federal Open Market Committee voted to leave the rate near-zero until summer 2013. Kocherlakota of the Minneapolis Fed explained his dissent from the policy this way: "I believe that in November [2010], the Committee judiciously chose a level of accommodation that was well calibrated for the prevailing economic conditions. Since November, inflation has risen and unemployment has fallen. I do not believe that providing more accommodation—easing monetary policy—is the appropriate response to these changes in the economy." 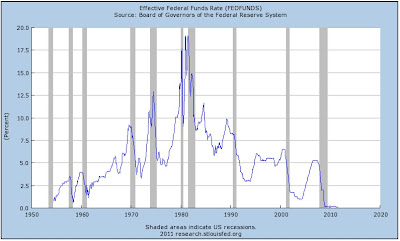 From an outsider's point of view, it sure looks as if the Federal Reserve action at its August 9 meeting was a response to headlines from the week before: headlines about the difficulties in hashing out an agreement to raise the federal borrowing ceiling, headlines about Standard & Poor's downgrading the credit rating of the federal government, headlines about the stock market falling.  But monetary policy decisions setting expectations for the next couple of years shouldn't be responding to yesterday's headlines.


I wouldn't advocate a sharp or immediate rise in the federal funds interest rate. But I would have voted with Kocherlakota against committing to two more years of near-zero rates. After all, part of what encouraged so much overborrowing in the years leading up to the financial crisis was that the Fed kept interest rates so low for a couple of years after the end of the 2001 recession. The answer to a financial crisis rooted in overborrowing is not to encourage the next wave of overborrowing! The Fed should be thinking about when and how it could get the federal funds target rate up into the 1-2% range--which after all seemed a reasonable interest rate when the economy was in an actual recession back in 2008.

The Federal Reserve buying Treasury bonds is another tough issue. Officially, the Fed's QE2 program of purchasing Treasury securities finished at the end of June, although as noted earlier, the Fed is still using money freed up by winding down its mortgage-backed securities to buy Treasury bonds. Back during World War II, which was fought largely with borrowed money, the mission of the Fed was to keep interest rates low so that federal borrowing costs could stay low. But in 1951, the Fed announced that it was done with that mission, and would instead focus on growth and low inflation. After a battle of bureaucracies, the Fed won its independence. (For an overview and discussion of what happened in the 1951 agreement, one useful starting point is this issue from the Richmond Fed in 2001.)

Having the Fed buy Treasury debt starting in 2009 during the worst of the financial crisis and its aftermath was a fully defensible decision. I sometimes say that it's generally a bad idea to shoot torrents of water at high speed through an office building--but if there's a fire, it's a policy that can make sense. During an emergency, steps that wouldn't make sense at other times sometimes need to be taken. But the recession has now been over for a couple of years. If the U.S. government wishes to run continuing large deficits, it needs to start facing the economic consequences of doing so. The Fed is already helping the federal government to borrow this money by holding interest rates so low, and in time will probably help the federal government further by creating some inflation to reduce the real value of what has been borrowed. It's time for the Fed to back away from being the actual default buyer for new federal debt. This step doesn't require any big announcement, only that the Fed refrain for now from announcing a QE3 program for buying more Treasury debt. If another financial crisis surfaces, after all, the Fed should try to hold something in reserve.