Can Later Retirement Ages Save Social Security and Medicare?

Social Security and Medicare have both made promises about future benefits that their current sources of financing won't allow them to keep. If we moved back the retirement age, would it fix these programs? Short answer: moving back the retirement age could have a large effect in addressing the financial problems of Social Security, but would have a much smaller effect in helping Medicare.

For Social Security, the website of the Office of the Chief Actuary has estimates of the cost savings from a wide variety of proposals. Proposal C2.6, for example, reads: "Increase the normal retirement age (NRA) 3 months per year starting in 2017 until reaching 70 for those attaining age 62 in 2032. Then increase the NRA 1 month every 2 years thereafter. Note that the NRA would increase from 66 to 67 faster than under current law. Increase the earliest eligibility age (EEA) from 62 to 64 at the same time the NRA would increase from 67 to 69; that is, for those attaining age 62 in 2021 through 2028. Keep EEA at 64 thereafter."

Those who will be 62 in 2032 are currently about 41 years old. Telling them now that early retirement will be 64 for them, instead of 62, and that normal retirement will be 70 for them, instead of the 67 years for this group in current law, seems to me completely reasonable. This change alone doesn't fix Social Security completely, but it would close about 70% of the projected funding gap for the program over the next 75 years.

For Medicare, in contrast, a higher eligibility age does a lot less. The Kaiser Family Foundation put out a report earlier this summer called Raising the Age of Medicare Eligibility: A Fresh Look Following Implementation of Health Reform.  The study assumes that the age of Medicare eligibility is raised from 65 to 67 as of 2014. Most policy proposals, of course, would have a slower phase-in. But the point here is not to analyze a policy proposal, but to get a handle on the changes that would arise when such a change in age was fully phased in. Here are some of the forecasts:


A key underlying issue here, of course, is that health care spending tends to rise with age. Pushing back the age of Medicare eligibility affects the relatively health group a little above age 65, but it doesn't affect the health care bills of the more aged, and so it offers relatively small cost savings for the Medicare program. In a study from last year, Gerald F. Riley and James D. Lubitz report on ""Long-term trends in Medicare payments in the last year of life" (Health Services Research, April 2010, 45(2):565-76). They point out that Medicare spending on those who die in a given year is much higher than on those who survive the year: in 2006, Medicare spending in 2006 on those who died in that year was $38,975, while Medicare spending in 2006 on those who survived the year was $5,993. Their estimates show that 25-30% of all Medicare spending is on patients in their last year of life, and that this number hasn't changed much over time, and isn't much affected by adjusting for changes in age or gender of the elderly over the last 30 years. 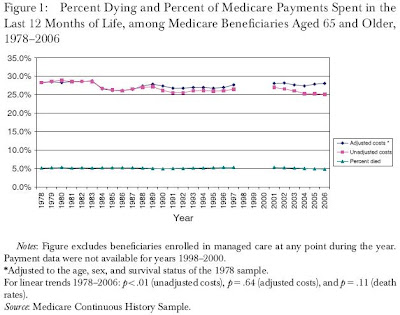