A standard pattern in economic growth is that a rise in per capita GDP is accompanied by a larger share of the population living in urban areas. Thomas Nechyba and Randall Walsh describe the U.S. experience in a Fall 2004 article on "Urban Sprawl" in my own Journal of Economic Perspectives: "Only slightly more than 5 percent of the U.S. population lived in urban areas in 1790, a figure that had tripled by 1850 and surpassed 50 percent by 1920. By the 2000 Census, 79 percent of all Americans lived in areas designated as “urban” by the Census Bureau.

But the trend toward urbanization is international, as the UNFPA noted in its 2007 State of World Population report on the theme: "Unleashing the Potential of Urban Growth." "In 2008, the world reaches an invisible but momentous milestone: For the first time in history, more than half its human population, 3.3 billion people, will be living in urban areas."


The McKinsey Global Institute has published a couple of interesting reports on global urbanization recent months. "Urban world: Mapping the economic power of cities," came out in March 2011.
"Half of the world’s population already lives in cities, generating more than 80 percent of global GDP today. But the urban economic story is even more concentrated than this suggests. Only 600 urban centers, with a fifth of the world’s population, generate 60 percent of global GDP. In 2025, we still expect 600 cities to account for about 60 percent of worldwide GDP—but the cities won’t be
the same. ... Today, major urban areas in developed regions are, without doubt, economic giants.
The 380 developed region cities in the top 600 by GDP accounted for 50 percent of global GDP in 2007, with more than 20 percent of global GDP coming from 190 North American cities alone. ... Over the next 15 years, the makeup of the group of top 600 cities will change as the center of gravity of the urban world moves south and, even more decisively, east. ... By 2025, we expect 136 new cities to enter the top 600, all of them from the developing world and overwhelmingly (100 new cities) from China. These include cities such as Haerbin, Shantou, and Guiyang. But China is not the only economy to contribute to the shifting urban landscape. India will contribute 13 newcomers including Hyderabad and Surat. Latin America will be the source of eight cities that include
Cancún and Barranquilla."

Here are predictions from McKinsey on the world's top 25 cities in 2025, ranked by GDP, per capita GDP, GDP growth, and Total population. Cities in blue are in the developing world, and they dominate the last two columns. 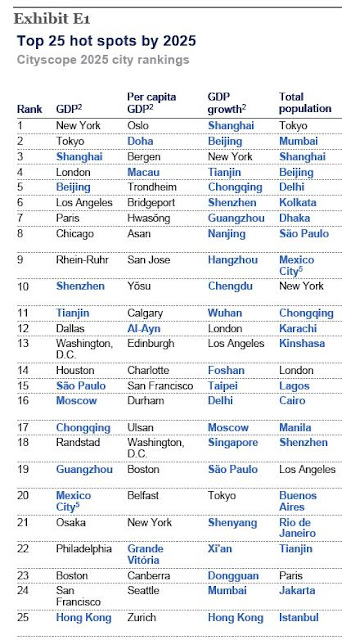 Cities in economic terms are bundles of economies of scale and agglomeration. For example, cities can act as a hub for economies of scale in production and lower transportation costs. They can provide a density of potential workers, employers, and customers, in a way that reduces risk for all parties and enables a greater division of labor. They can facilitate spillovers of information and skills, and serve as a breeding ground for entrepreneurship. However, the power of  scale and agglomeration have a negative side, as well. The cost of living and especially housing is typically higher in cities. Agglomeration can lead to pollution and stress on infrastructure, including congested transportation facilities and issues in providing water and electricity. Urban networking can can also facilitate criminal activity. Cities often create extremes of wealth and poverty rubbing shoulders, which can create political and social stresses. (For an exposition of cities along these lines, see Edward L. Glaeser's article "Are Cities Dying" in the Spring 1998 issue of the Journal of Economic Perspectives, which is too far back to be freely available on-line, but can be downloaded if you have access to JSTOR).

The McKinsey Global Institute makes this point as well: "As urban centers grow, they benefit from agglomeration—or economies of scale—that enable many industries and service sectors to have higher productivity than they do in a rural setting. It is also much less expensive to provide goods and services in concentrated population centers. Our research indicates that the cost of delivering basic services such as water, housing, and education is 30 to 50 percent cheaper in concentrated population centers than it is in sparsely populated areas. Very large cities attract the most talent and inward investment, and they are often at the center of a cluster of smaller cities, which creates network effects that spur economic growth and productivity."

But as McKinsey also argues that while huge cities are engines of economic growth, they can become so large that their diseconomies begin to slow them down. The largest future growth may not be in the largest cities: "Contrary to common perception, megacities have not been driving global growth for the past 15 years. In fact, many have not grown faster than their host economies, and we expect this trend to continue. We estimate that today’s 23 megacities will contribute just over 10 percent of global growth to 2025, below their 14 percent share of global GDP today. Instead, we see the 577 fast-growing middleweights in the City 600 contributing half of global growth to 2025, gaining share from today’s megacities."

The McKinsey Global Institute has takes up these issues of how the cities can contribute to growth, but also how the size of cities can limit their growth, in a series of reports, including a February 2009 report on cities in China, and an April 2010 report on urbanization in India.
The latest report on this subject from August 2011 discusses: "Building globally competitive cities: The key to Latin American growth." A few snippets from the report: