I'm always on the lookout for figures that offer vivid illustrations of what happened during the financial crisis. In fact, my first blog post in May was called "Two Ways of Illustrating the Financial Crisis." Here are four additional figures I've run across.

The first shows problems with bank lending. The figure was put together by the Stanford Institute of Economic Policy Research (SIEPR) as part of a "chartbook" for its annual economic summit. The note under the figure explains: "Non-current Loan Rate refers to the percentage of loans and leases 90 days or more past due and loans in nonaccrual status. Net Charge-off Rate refers to the annualized
percentage of loans and leases charged off (removed from the balance sheet because of uncollectibility), less amounts recovered on loans and leases previously charged off." Notice how the rise in these negative statistics far outstripped the credit crunch of the early 1990s. Notice also that both of these problems continued past the official end-date of the recession, but appear to have turned a corner in 2010. 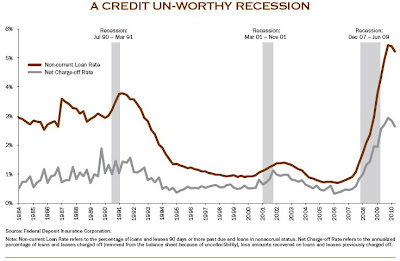 The second figure shows the net capital inflow of foreign assets invested in the U.S. economy, constructed using the always-helpful FRED tool--that is, Federal Reserve Economic Data--from the Federal Reserve Bank of St. Louis.  on data from the always  Notice that in the mid-2000s, inflows of foreign assets were very large and rising, topping out above $700 billion. Then during the recession, this inflow plunged all the way into negative territory, although the inflows are now back in the range of $500 billion. When I think about why the Federal Reserve felt compelled to buy Treasury debt during the recession, I think of this sudden disappearance of inflows of foreign capital. 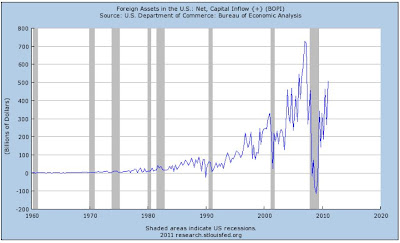 The third figure shows the hump in housing prices, as the housing bubble inflated and then deflated. Again, this is taken from the SIEPR chartbook. 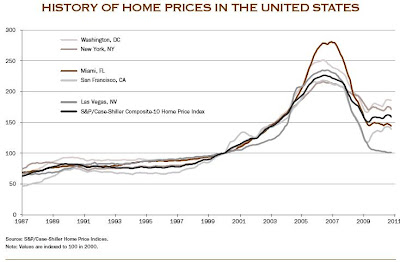 The final figure is a more standard illustration of interest rate spreads: in this case, the so-called "TED spread." The note under the figure explains: "The TED Spread is defined as the difference between the 3 month London Interbank Offered Rate (LIBOR) and 3 month U.S. Treasury Bill yield. It is an indicator of perceived credit risk in the general economy because Treasury Bills are considered risk-free while LIBOR reflects the credit risk of lending to commercial banks." This measure strongly suggests that the financial crisis itself took off in August 2007 and ended by June 2009. Again, the figure is lifted from the SIEPR chartbook. 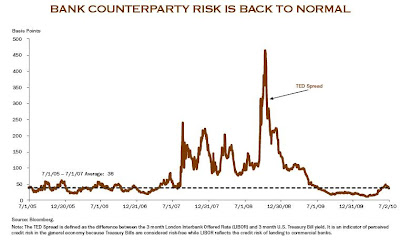