The Strategy, Policy, and Review Department of the IMF published a paper on "Changing Patterns of Global Trade" on June 15. I think students of economics often get a good sense of how international trade can benefit all nations participating, but at least at the intro level, they often get a less good sense of the actual patterns of international trade. One emphasis of the report is on longer global supply chains. Here are a few patterns and facts.

1) The share of foreign content embedded in gross exports is rising.
A country can import certain goods or services, use them in production, and then export them again. The share of foreign value-added in exports measures this process, and it has been steadily rising since the 1970s. Here's a table combining several studies, showing a rise in foreign value-added in exports from 18% in 1970 to 24% in 1990, 27% in 1995, and 33% by 2005.  This is a sign of longer global supply chains and rising global interconnectedness.

2) For some countries, gross exports can be less useful as a measure of what the country produces for export than the domestic value-added content of exports.
This figure shows gross exports as the dark line for each country, and domestic value added as the shaded line--the difference between the two is foreign value-added that is re-exported. For a number of countries like Singapore, Malaysia, and Thailand, there's a big gap between the two. 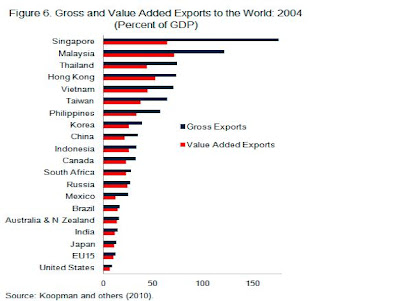 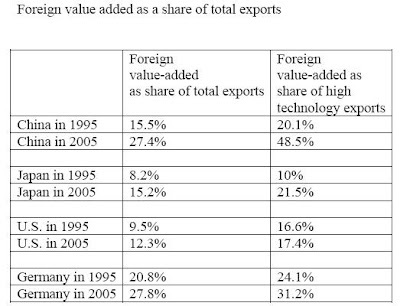 4) World trade has tripled since the 1950s.
"World trade has grown steadily since World War II, with the expansion accelerating over the past decade. Despite a post-crisis dip, the current level of world gross exports is almost three times that prevailing in the 1950s (Figure 1). With the exception of commodity-price booms in the 1970s and more recently in 2004-2008, commodity trade accounted for a declining share of this growth, with the share of noncommodity
trade rising to more than 20 percent of global GDP in 2008." 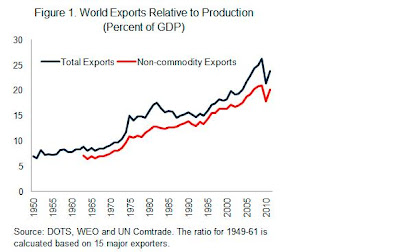 
5) Trade in higher technology goods has led the rise in international trade.
"The structure of trade has been characterized by a rising share of higher technology goods (Figure 4). The contribution of high-technology and medium-high-technology exports such as machinery and transport equipment increased, whereas that of lower technology products such as textiles declined. Technology
intensive export structures generally offer better prospects for future economic growth. Trade in high-technology products tends to grow faster than average, and has larger spillover effects on skills and knowledge-intensive activities. The process of technological absorption is not passive but rather “capability” driven and depends more on the national ability to harness and adapt technologies rather than on factor endowments." 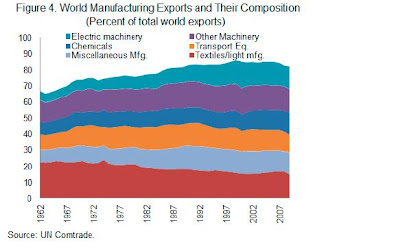