Tax Expenditures: One Way Out of the Budget Morass?

When seeking to reduce budget deficits, the usual choices are lower spending or higher taxes. But there is a third option, a category-scrambler called "tax expenditures." Basically, this category includes all the ways in which government tax revenues are reduced by deductions, credits, deferrals, exclusions, exemptions, and special preferential tax rates.

Tax expenditures scramble how one thinks about spending and taxes because if they were repealed, they would presumably lead to higher taxes, which seems like a tax increase, but they also would mean that the government is ending a decision to direct resources and intervene in a particular direction, which sounds like a spending cut. Earlier this year, there was a political dogfight over ending the tax breaks for ethanol production: some viewed this as a cut in government "spending" for ethanol; others viewed it as a covert tax increase. Because tax expenditures scramble categories, they may offer a politically savvy way to address some of our budget woes. Reducing tax expenditures might offer some revenue to reduce budget deficits, finance lower marginal tax rates, and raise funds for some more important government spending priorities.

Donald Marron has written a nice overview of these issues in the Summer 2011 issue of National Affairs in "Spending in Disguise." Richard Epstein also takes up this topic in an article in Defining Ideas called "The Tax Expenditures Muddle."

The dollar numbers here are enormous. Each year, the Analytical Perspectives volume of the federal budget presents tables showing the dollar cost of tax expenditures. Here's the list from the 2012 budget volume, cropped to include only those provisions which cost the Treasury more than $4 billion in the 2012 fiscal year 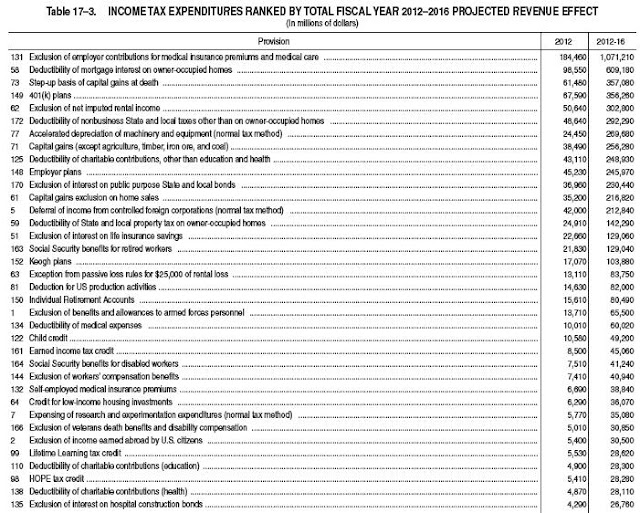 There are two obvious problems with using tax expenditures as a policy tool. The first is that the many of the biggest tax breaks are wildly popular. Just look at some of the big ticket items on the list: Exclusion of employer contributions for medical insurance premiums and medical care; Deductibility of mortgage interest on owner-occupied homes; Step-up basis of capital gains at death; Deductibility of charitable contributions, other than education and health; Exclusion of interest on public purpose State and local bonds; Capital gains exclusion on home sales; Deductibility of State and local property tax on owner-occupied homes; Exclusion of interest on life insurance savings; Social Security benefits for retired workers; and so on.


The second issues is that many of these tax expenditures have at least some economic justification. For example, money given to charity can be viewed as not devoted to one's own consumption, and thus appropriately outside the scope of taxation. Epstein offers an interesting potential justification for the interest deduction on home mortgages: "One clear case of a tax expenditure is the interest deduction on a home mortgage. There is no question that interest payments count as expenditures, and thus a reduction to gross revenues. But that expenditure is offset, not quite perfectly, by the consumption value of the home purchased with a home mortgage. A precise economic test would first allow the interest deduction but bring the imputed income attributable from home use into the system, even though it is not a receipt of any kind. But since calculating that imputed income is too costly, the law should follow the simpler rule that treats the consumption enjoyed as a perfect income offset to the interest deduction. In fact in most cases, the consumption value of the home is probably greater than the interest payments on the loan, especially toward the end of the life of the mortgage. Nonetheless, that excess imputed income goes untaxed, because of the insoluble difficulties of its direct measure."


Moreover, many tax expenditures are a kind of gamesmanship that can easily go astray. Marron offers a nice hypothetical example: "Princeton economist David Bradford once offered a simple thought experiment to illustrate how far such games could go. Suppose that policymakers wanted to slash defense procurement and reduce taxes, but did not want to undermine America’s national security. They could square that circle by offering defense firms a refundable “weapons-supply tax credit” for producing desired weapons systems. The military would still get the weapons deemed essential to national security, defense contractors would get a tax cut, and politicians would get to boast about cutting both taxes and spending. But nothing would have changed meaningfully."

Despite the political and practical issues, tax expenditures need a close look. They add up to something like $1 trillion each year, which is just too large a total to ignore. Certainly one can make an argument that tax expenditures have contributed to the rapid rise in health care costs over time, because health insurance is for so many people a form of untaxed compensation. One can also argue that tax expenditures have contributed to the roller coaster of housing prices that helped bring on the Great Recession. One can also point out that if the goal is to help people afford health insurance or housing, there are surely more effective and equitable methods than these tax breaks. Granted,  lot of tax expenditures aren't attractive political targets, but it's not clear to me that they are tougher than Medicare, or defense spending, or tax increases, or any of the other ways of addressing the U.S. budget deficits.