A few weeks back, I noted that a report of 10 international organizations offered a strong recommendation that countries drop their biofuel subsidies. Now the Committee on World Food Security, which is "the United Nations’ forum for reviewing and following up on policies concerning world food security" has published "Price volatility and food security: A report by The High Level Panel of Experts on Food Security and Nutrition."  The committee looks at recent high levels of food prices and extreme volatility, and puts a substantial share of the blame on policies to mandate and subsidize biofuels.

Prices of basic agricultural goods have doubled or tripled in the last few years, as shown in the table. The figure shows that there has been extreme volatility: a price spike in 2007-08, then a sharp drop, and now another price spike. 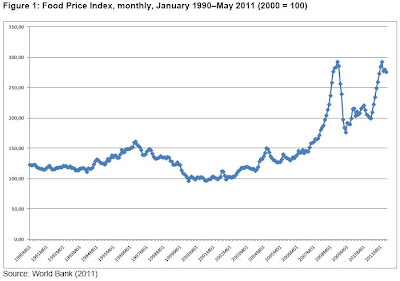 The report summarizes the problems caused by these trends in this way: "Food price volatility over the last four years has hurt millions of people, undermining nutritional status and food security. The level of price volatility in commodity markets has also undermined the prospects of developing countries for economic growth and poverty reduction. ... In the international markets, consumers with very different income levels compete for access to food. Consumers in poor countries are much more sensitive to price changes than consumers in rich countries. This is true of richer and poorer consumers within countries as well. It also
means that, when supplies are short, the poorest consumers must absorb the largest part of the quantitative adjustment necessary to restore equilibrium to the market. While a spike in food prices forces the poorest consumers to reduce their consumption, richer consumers can maintain more or less the same level of
consumption, increasing inequity in the overall distribution of food. Biofuel support policies tend to reinforce this uneven division of the quantitative adjustment because they make the biofuel industry less sensitive to higher commodity input prices."

To be sure, there are a variety of causes for high and volatile food prices. Earlier this week, I posted about some economists at the St. Louis Fed who argued that poor weather conditions played a role. Rising demand for basic grain products as incomes rise in emerging countries and people increase how much grain-fed meat they eat probably plays a role. Countries that reacted to the high food prices by limiting or banning food exports probably contributed to price volatility. Stocks of grains have been relatively low during the last decade or so, which has surely contributed to making the price spikes more severe. 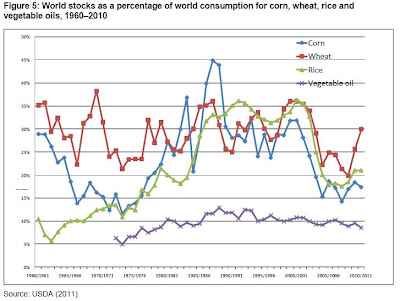 But along with these other factors, and potential policies to deal with them, biofuel subsidies stand out as a potent and reversible cause of high and volatile food prices. Along with the report's other analysis and policy suggestions, it states: "Biofuel support policies in the United States and the European Union have created a demand shock that is widely considered to be one of the major causes of the international food price rise of 2007/08 ... Given the major roles played by biofuels in diverting food to energy use, the CFS [Committee on Food Security] should demand of governments the abolition of targets on biofuels and the removal of subsidies and tariffs on biofuel production and processing."