As societies age, the cost of long-term care is going to rise. A May 2011 OECD report-- Help Wanted: Providing and Paying for Long-Term Care--lays out many of the issues.

Long-term care is a broader category that what we usually think of as health care. The OECD report defines the term this way: "Long-term care is the care for people needing support in many facets of living over a prolonged period of time. Typically, this refers to help with so-called activities of daily living (ADL), such as bathing, dressing, and getting in and out of bed, which are often performed by family, friends and lower-skilled caregivers or nurses."

While the United States spend much more per capita on health care than other high-income countries, the share of Americans receiving long-term care is quite low compared to many other countries. OECD projections also suggest that U.S. spending on long-term care as a share of GDP will stay below the OECD average in coming decades. 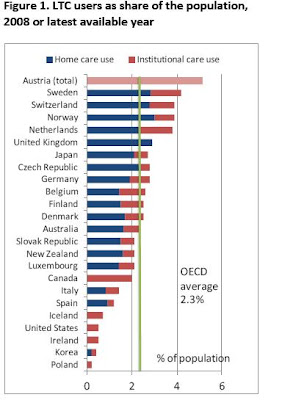 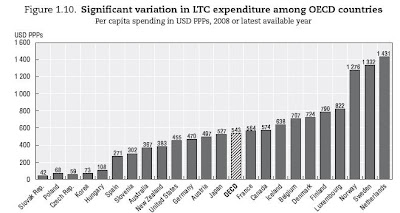 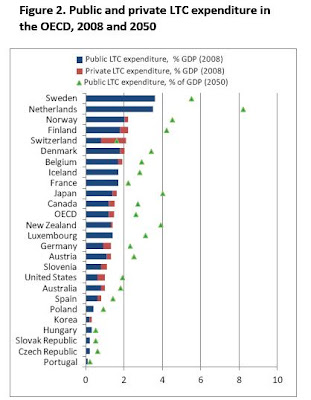 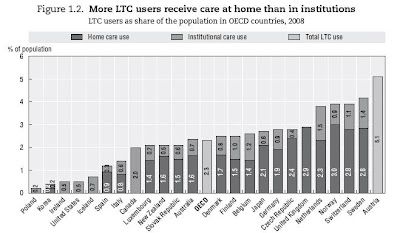 Moreover, in a number of countries, including Norway, Netherlands and Sweden, almost all of the spending on long-term care is from public programs, not private insurance or out of pocket. 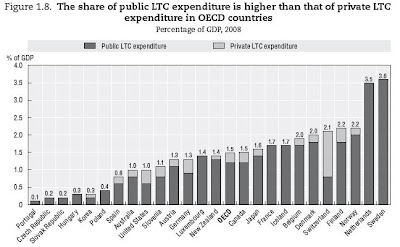 These patterns suggest to me that societies make a choice about long-term care. It's often not a choice that's made all at once, or made by a single piece of legislation, but rather a choice that arises out of a series of other decisions. It's a choice about how large a share of the extreme elderly are going to live in institutions paid for by a publicly financed program, and how large a share of the elderly are going to get support for continuing to live at home, while relying on their own personal and financial resources or on private insurance. Leaning toward the second option is clearly preferable. But there an inevitable need for public support for long-term care for some of the elderly--provided in the U.S. by Medicaid. Once that public back-up system exists, getting people to rely on their own resources becomes harder. Every country, including the U.S., needs to think urgently about how to strike this balance. At least in the case of long-term care, the U.S. has a health care situation where it is not starting off with problems of costs that are already extraordinarily sky-high.