The Congressional Budget Office has just published its August 2011 "The Budget and Economic Outlook: An Update." Although the language of the report is concise and unemotional, many elements of the report seem to me to carry a message that the worst of our economic travails are over. However, the report also points out that its economic forecasting and analysis was completed in early July, and the economy has had some worse-than-expected news since then. Here, I'll start with optimism, and then finish with the more grim recent economic news.

What about housing prices?
The CBO believes that the bursting bubble of housing prices has just about run its course. This figure shows two housing price series: Federal Housing Finance Agency and the Standard & Poor's/Case-Shiller index. As CBO explains: "The FHFA index covers only homes financed using mortgages that have been purchased or securitized by Fannie Mae or Freddie Mac. TheS&P/Case-Shiller index also includes sales financed with mortgages that do not conform to the size or credit criteria for purchase by Fannie Mae or Freddie Mac."  But the CBO is predicting that for the country as a whole, housing prices are soon going to start rising again. 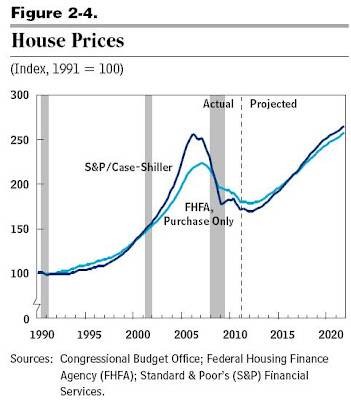 What about employment?
The good news here is that the bad news is diminishing. The first figure shows the ratio of unemployed people to job openings. After the 2001 recession, the ratio of unemployed to job openings rose to almost 3:1, before falling back to 1.5:1 in about 2007. Then during the recession, the ratio took off and reached almost 7:1, before now falling to about 4.5:1. The second figure shows net job gains in recent months, which aren't large, but are better than a sharp stick in the eye. The third figure shows that the unemployment rate peaked at 10.1% in November 2009, but was down to 9.1% by July 2011. The CBO projections are for the unemployment rate to fall modestly to 8.5% by fourth quarter 2012, and then to fall more rapidly. 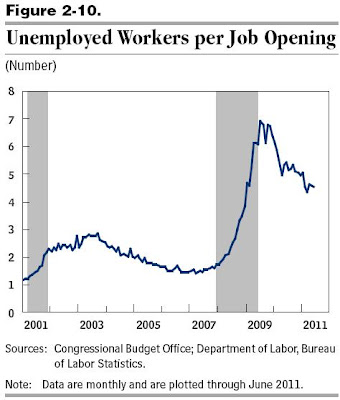 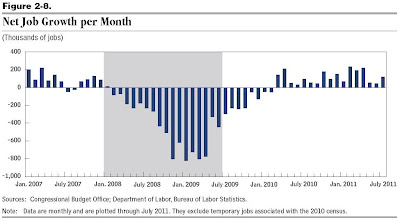 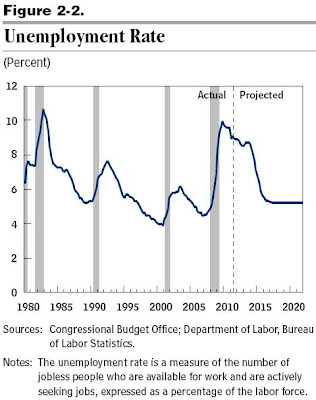 What about business investment?
Much of business investment just replaces worn-out capital. Net investment takes total investment and subtracts out the depreciation of existing capital, so that it is only looking at the addition to the capital stock. During the recession, many firms were postponing this new investment, but the CBO predicts that a bounceback is near. 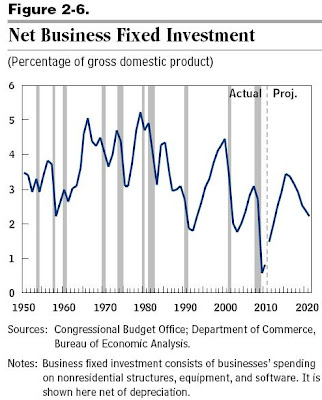 What about real GDP?
I quote: "For the 2013–2016 period, CBO projects that real GDP will grow by an average of 3.6 percent a year, considerably faster than potential output. That growth will bring the economy to a high rate of resource use (that is, completely close the gap between the economy’s actual and
potential output) by 2017." As with the unemployment rate, the forecast here is for modestly good news in 2012, followed by much better news in 2013 and after. 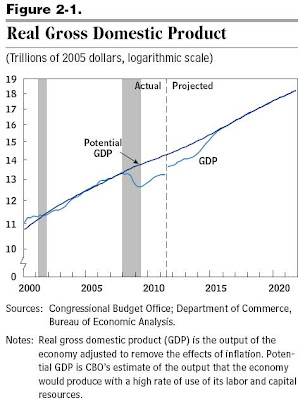 Is all this too optimistic?
The CBO makes a point of emphasizing that its economic forecasts were completed in early July. Since then, the European debt crisis has exploded, the federal government seemed unable to grapple seriously with debt issues and raising the debt ceiling, the stock market fell, economic statistics were released suggesting that the recession was deeper than previously believed, and more. Some of the figures above have little break in the line between present data and the forecast: the forecasts are based on the earlier uncorrected data, which after revision was worse than previously known.

At least for me, it's a natural reaction to look at these CBO forecasts that economic turnaround and catch-up are around the corner and roll my eyes in disbelief. Pessimism seems so worldly-wise; optimism seems so naive. But if the CBO is correct, whoever is elected president in 2012 is going to look like a miracle worker for the economy--mainly because by 2013 the U.S. economy will finally be escaping the sluggishness of the Long Slump and experiencing a robust economic recovery.