Less Migration Within the United States

Raven Molloy, Christopher L. Smith, and Abigail Wozniak discuss "Internal Migration in the United States" in the Summer 2011 issue of my own Journal of Economic Perspectives. They begin (parenthetical citations omitted throughout:

"The notion that one can pick up and move to a location that promises better opportunities has long been an important part of the American mystique. Examples abound, including settlers making the leap over the Appalachians prior to the Revolutionary War; the nineteenth century advice to “Go west, young man, go west” often attributed to newspaper editor Horace Greeley; John Steinbeck’s tale of the Joad family heading west in the 1930s to escape the Dust Bowl in The Grapes of Wrath; and the mid twentieth-century Great Black Migration northward out of the poverty of sharecropping and low-wage labor in the South. Indeed, it is widely believed that internal migration rates in the United States—that is, population flows between regions, states, or cities within a country—are higher than in other countries. This belief is not exactly wrong, but reality is more complex. For example, the Dust Bowl migrants of the 1930s were not representative of their time, but rather were an exceptional case during a period of markedly low internal migration. While the United States has historically had one of the highest rates of internal migration in the world by many measures, citizens of some other countries—including Finland, Denmark, and Great Britain—appear equally mobile. Moreover, internal U.S. migration seems to have reached an inflection point around 1980. As shown in Figure 1, the share of the population that had migrated between states trended higher during much of the twentieth century, with the exception of the Great Depression. However, migration rates have been falling in the past several decades, calling into question the extent to which high rates of geographic mobility are still
a distinguishing characteristic of the U.S. economy." 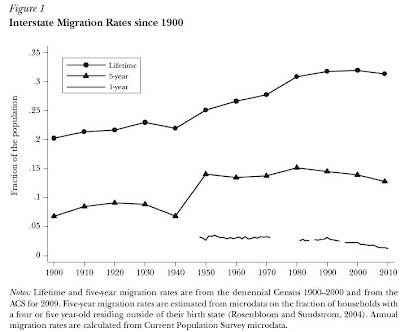 Molloy, Smith and Wozniak offer evidence that the decline in U.S. mobility is a very broad-based--and not a trend that has been made notably worse by the recent woes in the U.S. economy and housing market. They write: "By most measures, internal migration in the United States is at a 30-year low. Migration rates have fallen for most distances, demographic and socioeconomic groups, and geographic areas. The widespread nature of the decrease suggests that the drop in mobility is not related to demographics, income, employment, labor force participation, or homeownership. Moreover, three consecutive decades of declining migration rates is historically unprecedented in the available data series. The downward trend appears to have begun around the 1980s, pointing to explanations that should be relevant to the entire period, rather than specific to the current recession and recovery—that is, the decline in migration is not a particular feature of the past five years, but has been relatively steady since the 1980s."

They also offer some international comparisons.  They write: "Overall, the secular decline in geographic mobility appears to be specific to the U.S. experience, since internal mobility has neither fallen in most other European economies nor in Canada—with the United Kingdom as a notable exception." But while the most other countries have not been experiencing a decline in mobility, mobility levels in the U.S. continue to be higher than in most places. Here's an illustrative figure: 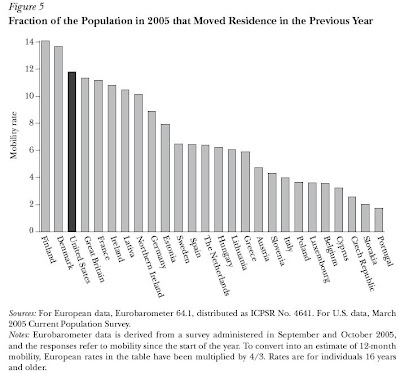