Economic Growth: Why We Need It, What We're Not Doing

Michael Greenstone and Adam Looney put together a background paper for a Hamilton Project conference called "A Dozen Economic Facts About Innovation."

Why is innovation and increased productivity important? Two of the main measurable reasons are how it increases incomes and life expectancy. It may be that the worst economic event to befall the U.S. economy in the last 40 years is not relatively recent shock of the Great Recession, terrible though that has been, but the productivity slowdown that hit in the early 1970s. Greenstone and Looney write: "If TFP [total factor productivity] had continued growing at the pre-1973 trend and that productivity gain were reflected in workers’ compensation, compensation could be 51 percent higher, or about $18 per hour more than today’s average of $35.44 per hour. This calculation highlights that small changes in innovation and annual TFP growth lead to large differences in long-run standards of living." 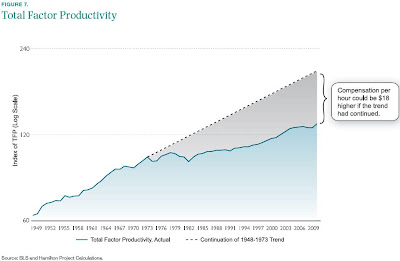 Economic growth and innovation have also helped to generate longer life expectancies, partly through reductions in  infectious disease, but also through better diets and cleaner water and sanitation. The gains in health have huge value. Kevin Murphy and Robert Topel estimated the long-term value of gains in health in a 2006 article in the Journal of Political Economy (pp. 871-904).From their abstract: "Cumulative gains in life expectancy after 1900 were worth over $1.2 million to the representative American in 2000, whereas post-1970 gains added about $3.2 trillion per year to national wealth, equal to about half of GDP. Potential gains from future health improvements are also large; for example, a 1 percent reduction in cancer mortality would be worth $500 billion." Here's a Greenstone-Looney figure on gains in life expectancy and reductions in infectious disease. 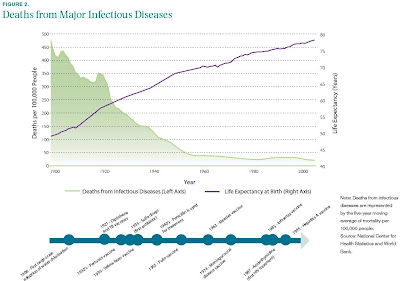 One of the most striking areas of innovation in recent years, of course, is the electronics industry. Here's a graph showing what it would have cost to buy the computing power of an iPad 2 over recent decades. Notice that the vertical scale is a logarithmic graph: that is, it is descending by powers of ten as the price of computing power halves and halves and halves over and over again. 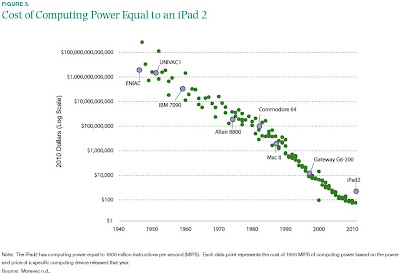 What's to be done to improve the prospects for innovation and economic growth for the future? There is a broad productivity agenda of improving human capital, investing in plant and equipment, and getting America's financial and budgetary problems under control. But there is also a more narrow technology-focused agenda. For example, every politician in the U.S. talks has been talking about the importance of technology for decades--but government spending on research and development has actually been sinking. Corporate spending on R&D has taken up some of the slack, but government R&D is far more likely to be focused on the basic research that generates new industries, not the tightly-focused process companies often use to update their products. 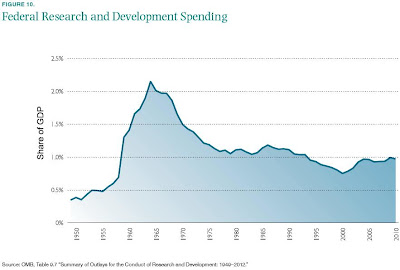 Another issue is to have America's higher education system focus more heavily on the so-called STEM fields: that is, science, technology, engineering, and mathematics. The share of total U.S. degrees being granted in these fields has fallen since the mid-1980s, and compared to other countries, the U.S. higher education system grants a lower proportion of its degrees in STEM fields. 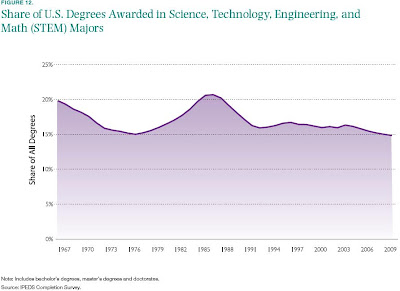 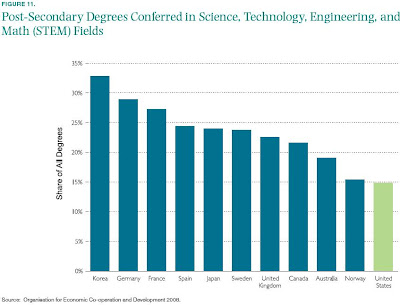 A final issue is to improve the U.S. patent system. There are lots of subtle issues about what kind of innovation deserves a patent, or what doesn't, and how much a patent is really worth in an intellectual property showdown. But at a more basic level, a slow patent system is less useful for everyone--and the time to get a decision from the U.S. Patent Office has been rising. 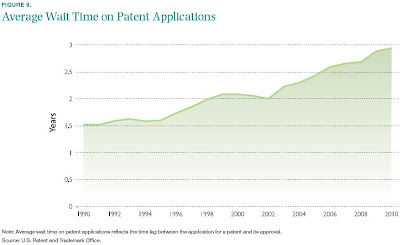